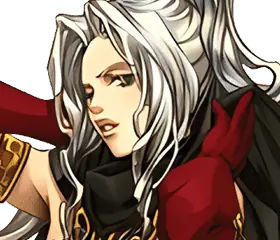 Jeane (ジーン, Jīn) is a recurring character who appears in no less than eight games in the Suikoden series. Jeane is a hauntingly beautiful rune sage who never appears to age, giving rise to much speculation.

Jeane was an attractive woman who wore a variety of outfits over the years. She commonlly had long white or platinum blond hair, styled in a high ponytail. During her time in the Queendom of Falena, her hair was colored a shade of pink instead.

During her time in the Toran Liberation Army and the New State Army, Jeane wore loose, flowing dresses. By the time of the War of the Champions, she wore an elegant black dress instead. Her time in the Island Nations and Falena saw considerably more revealing clothing worn.

Yuri, Jeane's assistant in Two River City, noted that Jeane was prone to changing her mind quite easily.

Jeane was considered very attractive to a number of men. Roget would complement her and her skills regularly. Stallion would often spend time running in circles in her store. However, she also was complimented a lot by women. Meanwhile, Richmond tried to find out more about the mysterious woman but failed, merely stating she was a "tough lady" and "one hell of a woman". Kidd and Oboro showed a similar behavior and could not find out further details about her. Jeane appeared to know Raura very well, but how they know each other is unknown. She also seemed to know Eresh, but their connection is unknown.

During and after the time of the Island Liberation War, she seemed to be very fond of baths, a trait she did not show in later conflicts.

Jeane is known to be one of the most powerful magicians and rune sages in the world, serving in many wars and conflicts.

Jeane is a mysterious person about whom nothing is known, save for her occupation; she served as a rune sage at various points throughout history. She is incredibly beautiful and carries with her a peaceful grace that leads many people to be attracted to her. Her air of mystery is furthered by the fact that she never speaks about herself. It is even unknown if she is the same person in all her appearances throughout history or if there is some other explanation. 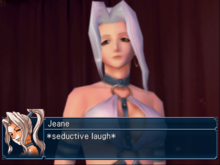 You can't just say that out loud, you have to actually laugh.

She was found working in a rune shop on Na-Nal Island during the Island Liberation War where many customers would come to the store merely to steal a glance at her. Once the Headquarters Ship arrived on the island, she agreed to join the crew and moved to the vessel. There, her skill as a rune sage were only surpassed by her prowess as a magician and she fought on the front lines during the war.

Once the war ended, she disappeared, seemingly without a trace. Several years later, she would be found in the Kooluk city of Frontier Town Haruna, at the city's tavern. There, Jeane agreed to join Kyril's group after he fulfilled her request through the Quest Guild to gather five elemental fragments. She was friendly with several members of the group, but still remained a mystery for most. Ornela asked her to stay in Kooluk once their battle has ended, but Jeane refused, not being able to explain the reasons behind her decision. Katarina also asked her if she would like to teach magic in Razril, an offer which she refused again. She developed a very good relationship with Simeon. 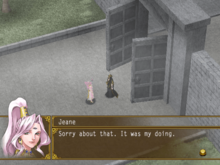 Sometimes she gives enemies powerful runes, but we don't hold it against her.

Following the collapse of the Kooluk Empire, Jeane's whereabouts were unknown for many years afterwards, but she already expressed her wish to open another rune shop somewhere. She would appear in the Queendom of Falena over a century later, although no one could confirm that she was the same person that had served in the Island Liberation War. During the Sun Rune War, she had just opened a rune store in Sol-Falena.

The Godwin Faction had previously contacted her, hoping for knowledge on both the Sun Rune and the Twilight Rune but she had rebuffed them. She would later agree to work with the Imperial City Recapture Army but her overall motivations remained a mystery. She was acquainted with Zerase and Eresh, two other powerful magicians who fought in the conflict.

Following the war, Jeane returned to her store in Sol-Falena for a time before leaving suddenly. She was seen again some years later in the Scarlet Moon Empire, where she was encountered by the Toran Liberation Army in the town of Antei working in a rune store. When its leader attempted to recruit her, she immediately agreed. The reasons behind her swift consent are unknown. She opened her store at Toran Castle and continued to attach and remove runes when requested. Sheena in particular was appreciative of her physical beauty.

Following the end of the Gate Rune War, Jeane returned to Antei to resume her occupation as rune mistress there. 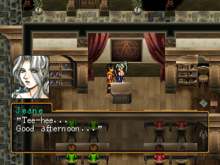 However, Jeane evidently did not stay in Antei for long as she had soon opened a shop in Two River City in the City-State of Jowston. By the time of the Dunan Unification War, she was teaching at New Leaf Academy, leaving the store in the hands of her assistant, Yuri. She helped in the defense of Greenhill City, but when the city fell to the Highland Army, Jeane returned to her Two River store, only to soon agree to join the New State Army. She served in a magic unit and specialised in lightning magic during the war.

Following the Dunan Unification War, she was said to have returned to Antei to resume her work once again, as enigmatic as ever.

By 475, Jeane had moved from Antei once again and was working at a rune shop at Brass Castle in the Zexen Federation. She would move to Budehuc Castle, opening a store there, becoming part of the Fire Bringer during the War of the Champions. There, she remained shrouded in mystery with even Kidd unable to penetrate her secrets. Koroku could apparently ascertain something about her identity, however.

Following the war, Jeane returned to Brass Castle, continuing her work as a rune sage.

Jeane's theme is the song "Enchanting Runemistress" which first plays during her appearance on Na-Nal Island in Suikoden IV. It is song 10 on disc 2 of the official Suikoden IV Original Soundtrack.

The song is reprised under the same title during her appearances in Suikoden V. This arrangement is song 39 on disc 3 of the official Suikoden V Original Soundtrack.