Kiba Windamier (キバ ・ウィンダミア, Kiba Windamia) is a character in Suikoden II. Kiba serves as the general of the 3rd Highland Army, aided by his son and adjutant, Klaus.

Kiba Windamier is a general from the Highland Kingdom. Kiba came to fame in his first battle after defending Fort Retto with only 100 men and successfully repelling 3,000 City-State of Jowston soldiers. He also earned acclaim for putting down revolts in Highland, as well as fighting in alliance with the Holy Kingdom of Harmonia due to the countries historically close ties.

By the time of the Dunan Unification War, Kiba was general of the 3rd Highland Army. Despite his fame and high rank in the army, Kiba was apparently not well compensated for his work, though he was extremely loyal to King Agares Blight. 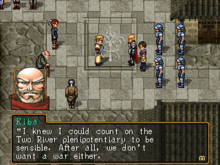 This is the military feint called "Lying Through Your Teeth".

During the Dunan Unification War, Kiba and his son Klaus attacked several Jowston territories. Their initial attempt to take Two River City, by dividing the city against itself before reneging on a peace treaty was only thwarted at the last moment by the swift intervention of the New State Army, forcing an orderly withdrawal.

Later in the war, General Kiba easily occupied Radat Town, using it as a base to strike at the New State Army Headquarters. However, this time the idea of an inner split was used against the advancing force. Thinking General Ridley Wizen had abandoned the New State forces previously, Kiba ordered an offensive strike at the heart of the New State Army, only to be surrounded by Ridley's forces in an ambush. 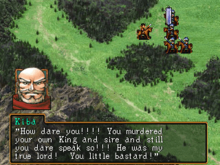 Do you think he's still sore about the whole patricide thing?

Furthermore, Kiba was abandoned by Rowd's 4th Highland Army who refused to provide support, leaving Kiba's forces completely surrounded and isolated. After being captured by the New State Army, Kiba received word that Agares had been killed and Luca Blight was now King of Highland.

Just moments ago, Kiba had insisted he and Klaus be given a warrior's death, without any consideration given to the idea of defection. However, this news implied Agares' death at Luca's hands. Thus, Kiba was persuaded by Shu to put aside his warrior's pride and defect to the New State Army due to Luca's unbridled brutality being a threat not only to Jowston, but Highland as well. 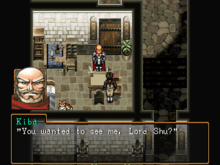 Kiba fought bravely in several battles for the New State Army, fighting for his beliefs and those of his new allies. Despite this, he felt a certain pain in his defection, feeling he had lost his pride as a warrior since his defeat. This feeling also drove him to find meaning in his life and his own choices.

During the New State Army's attack on the Matilda Knightdom, Shu asked Kiba to make the ultimate sacrifice: to divide the Highland Army's troops by attacking and holding the Mercenary Fortress in eastern Muse Principality with a mere token force, knowing that it was unlikely he would survive.

Kiba agreed to the strategy and did so without regret, willing to offer his life to the ideals of his allies. Playing his role spectacularly, he drew out the forces of Leon Silverberg, dividing the Highland Army. He was mortally wounded in the attack and died as a warrior.