Chris Lightfellow (クリス・ライトフェロー, Kurisu Raitoferō) is one of the main protagonists of Suikoden III.

Chris is the Acting Captain of the Zexen Knights who must try and reconcile her duties with her morals. She is often called the "Silver Maiden" and the "White Hero", both for her beautiful appearance and her terrifying skill with a blade. 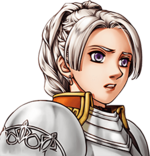 As a Zexen Knight, Chris Lightfellow is always clad in her customary silver armor, boots, and greaves. Underneath, she wears black garments. She wears orange and gold bases as befitting her status as one of the Six Mighty Knights. Her silver hair is braided and tied up to keep it from being a detriment in combat. She has violet eyes.

On her journey in the Grassland, Chris wears practical traveling gear. A green jacket over a white shirt, long navy-blue pants, brown boots, and black gloves. Her hair is also let down, revealing to hang to the small of her back. In both outfits, she wears small teardrop earrings.

Chris Lightfellow was known as the Silver Maiden due to her appearance, riding a white horse, clad in silver armor, and with shining white hair. Although celebrated as a hero within her native Zexen for her pride and noble bearing, Chris placed immense pressure on herself due to feelings that she was not worthy of such praise.

As a Zexen Knight, her loyalty was to the institution of Zexen itself, rather than its lands or its people, per se. Chris' dogmatic loyalty to the Zexen Council contrasts with her comrades' personal loyalty to her. This perspective began to shift once she journeyed into the Grassland and met Yun, who was willing to sacrifice her life for her people.

Eventually Chris comes to believe that people can work together to protect what is important to them, even if their positions and ideas are different. This eventually enables her to accept the titles lauded upon her in order to become a symbol of her beliefs. Although she can be overly serious, she has a gentle personality overall and is greatly trusted and respected both by her subordinates and the people of Zexen.

Chris Lightfellow was born to Anna and Wyatt Lightfellow in Vinay del Zexay. She lost her father at a young age and her mother passed not long after. Growing up, she was skilled in swordplay but disliked more traditionally feminine activities. She was tone-deaf and did not last long in school choir because of this. Inspired by her father's ideal and in some way pursuing his memory, Chris would train to be a Zexen Knight.

At the Zexen Federation Day Ball in 470, Chris ended up brawling with Lilly Pendragon, first daughter of the Tinto Republic. Lilly had insisted Chris dance with her and when Chris, who was not good at dancing at the time, accidentally spilled a glass of wine on Lilly's dress, a brawl soon broke out. Lilly ended up throwing a cake at Chris, who retaliated with a slap. The fight would finally end after the two finished hurling tables at one another. Despite, or rather because of, this incident, the two recognized the strong will in each other and the two, especially Lilly, considered themselves friends.

During a fierce battle against the Grassland clans, before the War of the Champions, the Zexen Knight commander Galahad was killed. It was Chris who rose up to rally the knights and win the battle. This impressive showing led to her being appointed deputy leader of the Zexen Knights. Although dedicated to her job and willing to shoulder the heavy responsibility it brought, the plots of the Zexen Council to provoke fighting in Grassland combined with the invasion from the Holy Kingdom of Harmonia began to take its toll.

In the Zexen attack on the Karaya Village, Chris sighted her father's armor outside a Karaya house. Concluding that Wyatt had been killed and his armor claimed as a battle trophy, she would be filled with malice. When Lulu jumped to attack her, Chris reacted instinctively, cutting down the youth in an instant, much to her shock.

Becoming disillusioned, Chris would find out from one Nash Clovis that her father, Wyatt, was still alive. Already pondering a question from Salome Harras on what Zexen meant to her, she would leave on a journey to follow the trail of her father, defending the Chisha Village and eventually arriving at the Alma Kinan Village. There, she learned from Yun that the True Water Rune, the True Rune her father bore, was sealed.

Once the Harmonian invasion began in earnest, Chris fought tirelessly as a member of the Fire Bringer. After a battle over the True Water Rune, Chris was reunited with her father one last time. Wyatt would explain the reason for his disappearance, the need to ensure his family's safety from Harmonian assassins. Following his dying wish, Chris would inherit the True Water Rune and fight on in his name.

As the war intensified, Luc temporarily managed to take the True Water Rune but fighting alongside her allies at the Ceremonial Site, Chris was able to reclaim her rune and helped to defeat Luc and end the war for good.

Although the peace won extended far beyond the borders of Zexen relations with the Grassland clans and Harmonia did not improve easily. Still, committed to peace and vowing to protect the people, Chris would go to receive further fame as Captain of the Zexen Knights.