Leon Silverberg (レオン・シルバーバーグ, Reon Shirubābāgu) is a supporting character in Suikoden and an antagonist in Suikoden II. Leon Silverberg is a skilled military strategist with experience in many wars including the War of Succession, the Gate Rune War and the Dunan Unification War.

Leon Silverberg is a famed strategist of the Silverberg family and served as Barbarosa Rugner's chief strategist during the War of Succession, leading Barbarosa's forces to a stunning victory. Possessed with a rational and realistic eye for strategy, his goal was to achieve victory swiftly at any cost, with the aim of minimizing protracted suffering.

Prior to his Imperial service, he lived his life travelling around the country. He would occasionally visit his nephew, Mathiu in Gregminster and would become his guardian, tutoring his nephew in the ways of military strategy. Once the War of Succession broke out, Mathiu would introduce Leon to Emperor Barbarosa, leading him to become the lead strategist for his forces.

Following the war, Leon would both propose and participate in the Kalekka Incident and he is historically credited as the man who rallied the Scarlet Moon Empire forces after witnessing the devastation supposedly wreaked upon the village by the army of the City-State of Jowston.

In reality, Leon had led the razing of Kalekka in order to shore up support for the Empire's defensive war against the Jowston invaders. Following his retirement from Imperial service, Leon moved to Kalekka, not out of any sense of regret but simply because he liked the silence of the now-abandoned town. 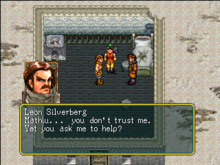 You're very good at killing your enemies, best have you with us.

During the Gate Rune War, Leon remarked how impressive the Toran Liberation Army had become and to let Mathiu know this, in an encounter with McDohl. In turn, Mathiu asked the leader to deliver a letter to Leon but nevertheless journeyed to Kalekka himself to beg for Leon's aid, noting that while he could not trust Leon, he could trust his abilities.

Leon himself was surprised but feeling that using his abilities to end the war that much quicker was the best choice of action, agreed to the request, serving the Liberation Army as a strategist for the remainder of the war.

Following the end of the war, Leon returned to Kalekka, intending to spend the rest of his life there. Three years later, however, he would be drawn by Jowy Atreides to become involved in the Dunan Unification War as a strategist for the Highland Kingdom, agreeing with Jowy that regional unification would make for the surest path for peace.

He would plot the assassination of King Agares Blight in order to have Prince Luca take the throne. But that too was part of a plot to force a confrontation between King Luca and the New State Army, leading to Luca's death and the ascension of Jowy to the throne.

He would continue to serve as the chief strategist for the Highland Army and during a confrontation with Shu, the strategist for the New State Army, would lambaste him for his recklessness and desperate tactics. Still, following that encounter and his wounding during a battle with Kiba Windamier, Leon would remain behind the frontlines for the remainder of the war.

Following the final battle and the fall of L'Renouille, Leon would be waiting in the throne room at L'Renouille Palace. There, he would unleash the Beast Rune's Silver Wolf incarnation with his own blood for the New State Army to defeat. His whereabouts following this are unknown.