The hero (主人公, Shujinkō), known by several different names, is the protagonist of Suikoden V.

He is the Prince of Falena, forced into exile by the machinations by the nefarious Godwin Faction, causing him to raise an army to save his sister and rescue the realm. 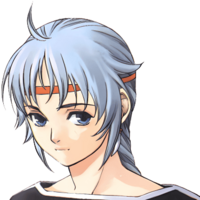 The Prince was a slender young man who had inherited the silver hair of his mother and the martial prowess of his father. His eyes were a pale blue, almost matching his hair.

The Prince liked to dress in a way that was easy to move around in, but still has the quality of royalty. In times of peace, he wore his standard royal clothing. It was a loose-fitting garment with a warm color scheme based on the motif of the sun, as is typical of royalty. The quality is slightly inferior to that of female royalty. 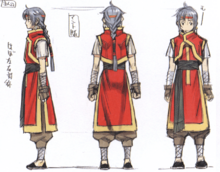 While on the run after escaping the Sun Palace, he wore a civilian outfit, made based on the attire of residents of Rainwall. He wore a cloak that covers him completely, for added concealment as his royal lineage tends to shine through no matter the attire. It is deliberately reminiscent of the outfit of the hero of the first Suikoden.

The outfit he wears the most in Suikoden V, however, is a special battle outfit made for him. In order to manipulate the special three-part staff, ease of movement was the primary consideration for this outfit.

The hero grew up loved by those around him, perhaps because of his naturally gentle nature. His mild personality allowed him to be well-received by many people despite his royal upbringing.

He was looked down upon by some within the nobility of his perceived lack of political importance. Perhaps due to the influence of his father, Ferid, he never hated his position. Part of his appeal was that he had the same perspective as the common people in some regards. However, the Prince also held strong convictions and was determined to use what power he had for the sake of justice. His sound judgment and consideration for other people drew people to him.

When his happy life was torn asunder, it was the thought of family that brought back from his despair. Though he cared for Falena and its people, the foundation of his struggle was to bring back the smile of his beloved sister, Lymsleia, not revenge. The Prince grew up alongside Lyon and so the two also had a close relationship but a non-romantic one.

The Prince was born eldest child of Arshtat Falenas and Ferid. It was once Falenan tradition that a first-born son in the royal family would be killed in order to avoid bad luck and disaster from affecting the nation, but this would never be a serious concern in this situation. Having no right to the throne, the Prince was regarded as inconsequential within Falenan politics. However, his parents gave him just as much love as they did his younger sister, Lymsleia, who also held great affection for him. This, along with the devoted protection and friendship of his bodyguard, Lyon, ensured that the Prince would long for nothing as he grew up in Sol-Falena.

As a child, the Prince, along with his family, would often travel to Lordlake to stay with Lord Rovere. On one occasion, he and Lyon attempted to sneak out of the manor to explore the forests surrounding the area. However, they ended up being spotted and prevented from leaving by the manor guards. The Prince and Lyon would later be chided by Ferid and Rovere, not for attempting to leave the manor to explore, but for being stopped from doing so. When he was younger, the Prince was actually looked down upon by his younger sister for not being in line to the throne before she realized the love the Prince had for her.

After the Lordlake Uprising in SY 447, more responsibility was placed on the Prince's shoulders, being sent to investigate the town two years later, along with Lyon, Sialeeds and Georg Prime. This investigation gave him his first view of the wider world as well as an insight into the problems creeping across Falena. After this, he began to learn about the Sun Rune's influence over his mother, being drawn further into Falenan politics, a move met with distaste by the Senatorial factions.

He helped uncover part of the Godwin Faction's plans while attending the Sacred Games in Stormfist, although conclusive evidence could not be obtained. Despite the royal family's best preparation based on this information, the Queen's Assassination plot succeeded and the Prince was forced to escape the Sun Palace along with Lyon, Sialeeds, Georg Prime and Zegai. They eventually managed to make it to Barows territory and fought alongside him for a time until the realization of the Barows' involvement in the Lordlake Uprising and the theft of the Dawn Rune, which the Prince inherited.

As Leader of the Imperial City Recapture Army

Eventually, the Prince became the leader of the Imperial City Recapture Army, dedicated to restoring order to Falena rather than giving control to the Godwin faction. Thanks to the help of skilled strategist, Lucretia Merces, a base was secured at Ceras Lake and the army soon held over two-thirds of Falena under their control. However, an attempt to rescue Princess Lymsleia on the field of battle led to the betrayal of the Prince's aunt, Sialeeds, and the mortal wounding of his bodyguard and close friend, Lyon.

Saving her life with the Dawn Rune, the Prince traveled to the Deep Twilight Forest ruins in order to gain more power to heal her completely. With the help of Lorelai, Zweig and Killey, he was successful, eventually healing Lyon with his new-found power, although she needed a lot of time to fully recover. Although the Recapture Army suffered a run of setbacks following the Godwin alliance with the New Armes Kingdom, the Prince was eventually able to turn things around with the help of Lucretia along with Georg Prime.

The Sun Rune War would finally near its end and Sol-Falena was finally retaken, reuniting the Prince with his beloved sister. However, despite victory in the war, there was still one last mission. Marscal Godwin had escaped to the Ashtwal Mountains with the Sun Rune, forcing the Prince and his companions to pursue him through the Sindar ruins there. Eventually defeating Marscal and the Sun Rune Incarnation, the Prince was able to return to Sol-Falena, after first encountering the spirits of his dead parents and those he had lost over the course of the war.

Following this, the Prince became an important part of Queen Lymsleia's new Falena, being appointed Commander of the Queen's Knights. This move was designed to show that the position would now be earned on merit, not by being married to the Queen. It seemed that he would serve excellently as a guardian for Falena, his strength and courage becoming known far and wide.

The hero of Suikoden V has no in-game name but is occasionally referred to by different names in other publications and releases. He was initially referred to as Faroush, (ファルーシュ, Farūshu), a portmanteau of his parents' names in a promotional save file released in Japan. This name would be supplanted in fandom use by the 2005 novelisation where he is called Freyjadour (フレイアドゥール, Fureiadoūru). This is now the name in common usage in the English-speaking fandom. The manga releases give him another name, Ardil (アーディル, Ādiru).

In his guest appearances in Konami's pop'n music series, the hero is referred to as Prince of Falena.

In guidebooks, he is usually referred to as Hero V (主人公V) or some variant thereof, such as V主人公 to distinguish himself as the protagonist of the fifth Suikoden title.

The Prince's weapon is an articulated tri-nunchaku. It is a national treasure of the Queendom of Falena that has been handed down to him. When not in use, it is stored on the back of the body by a belt with a holder, and when in use, the central piece, which is split in two when stored, is connected and combined.