Elza (エルザ, Eruza) is a character in Suikoden II and Genso Suikogaiden Vol.1. She is a gunner on the run from the Howling Voice Guild.

Training in the Howling Voice Guild

Elza was born in Sajah Village and was sold by her parents to the Howling Voice Guild, being one of the few children who were not born in The Tower. She quickly formed a bond with Kelley and Clive and the three of them would aspire to become Knight class gunners, the first ones in several years who would be able to pass the tests.

She also formed a bond with Nash Latkje. Although they were from different classes socially, due to their similar age and intensity of the guild, they formed a good rivalry. Nash himself would say that he never managed to beat her, but Elza had high regard for his strength. 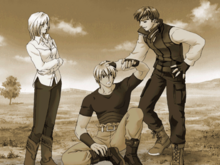 The elders of the Guild became suspicious of the three close friends, especially as they were apprentices of Sauro, one of the other elders, fearing an imbalance in power within the guild. They appointed the most easily manipulated of the three, Kelley, as the new Guildmaster, isolating him from his friends.

One day, Elza was asked to duel Kelley, which was most probably a scheme pulled by some of the elders: Kelley was not able to hold Storm, the weapon of the guild master which is said to have its own will and to choose its own master, but Elza could handle the weapon with no problem.

In the following duel, Kelley chose Mond, representing betrayal, which was loaded with blanks and Elza chose Stern, representing trust in the Guild, killing her childhood friend in the duel. Elza took both weapons and escaped immediately, fearing that the elders would blame her for setting up Mond with blanks. She could escape with no problems as Kelley ordered to leave all gates open, having chosen the empty gun intentionally, and was from then on hunted by Clive.

Run from the Guild

She was able to trick Clive several times, even setting up a fake grave with her name in Rockland in the Scarlet Moon Empire. She had a chance encounter with Nash while on the run from Clive, helping him to fight off a Golden Wolf. During the course of the Dunan Unification War, she left clues for Clive and the two even met in Radat Town and Muse City, but it was not until she was eventually cornered in her hometown that she died in a duel with Clive, according to guild rules. This time, Clive chose Stern, and Elza took Mond. Again, Mond was loaded only with blanks. Her last words were filled with regret, but she also pointed out while Clive did a good job, he was not able to capture her.