It was available exclusively through Konami's Konamistyle online store and as such has no ISBN reference number. Due to this, it quickly became rare and often resold for several times its retail value.

In July 2019, a digital version of the encyclopedia was made available from Konami's Chakushin Uta online store for 5000 points (approximately ¥4400 through Chakushin Uta's point-buy service). This version is viewable on the Chakushin Uta website through the owner's account only.

The Genso Suikoden Kiwami Encyclopedia is divided into three main sections. Before the first section, there is a selection of full-page artwork from both Ishikawa Fumi and Kawano Junko. Following the three sections listed below, there is also an index included. 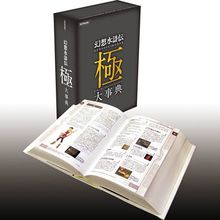 This is the majority of the book, covering pages 15 through 798. It is a collection of encyclopedic entries, divided by game into eight sub-sections (Suikoden, Suikoden II, Genso Suikogaiden Vol.1 & 2 as a combined sub-section, Suikoden III, Suikoden IV, Suikoden Tactics, Suikoden V, and Suikoden Tierkreis), of characters, locations, runes, monsters, items, etc. throughout the series.

It also removes entries from Suikoden series publications such as the manga, novels, or short story collections. These entries were previously included in the 2002 Genso Suikoden Encyclopaedia.

Game screenshots are included in many entries and character artwork is provided.

Genealogy of the World

The Genealogy sections runs from pages 799 to 846. It covers many broader sections of Suikoden series. This section explains the Infinity in the sub-section "One Million Worlds".

The 27 True Runes, races, unique occupations such as window makers or tricksters are discussed in the sub-section "The World of I~V". While Suikoden Tierkreis is similarly elaborated on in "The World of Tierkreis".

Finally, timelines are listed. "The World Chronology of I~V" is a detailed, but by no means complete, timeline of the world of the majority of the series. "The World Event of Tierkreis", meanwhile, is not a timeline. It merely lists the order that events happened in in the game itself. 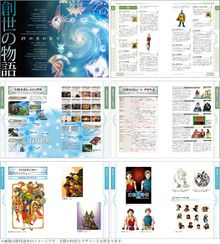 The Library begins on page 847 and ends on page 1038, making way of the index section.

It is the section of the book that gives attention to Genso Suikoden Card Stories with the appropriately titled sub-section "Card Stories", giving a brief overview of the Game Boy Advance video game. This is followed by a sample of Card Stories artwork from several different artists who contributed card artwork over the years. Card Stories 2, which focused more on Suikoden III and Suikoden IV characters and events is not mentioned.

After this, each game has a selection of promotional and other artwork displayed in the "Illustration Gallery". Cover artwork, artwork drawn for novelizations, phone card artwork, countdown artwork, and some unique portraits from the games themselves are all displayed here.

Following this is an "Item Information" sub-section. This holds a (again, not exhaustive) gallery of Suikoden series CDs and other merchandise, such as Card Stories packs, pre-order bonuses, calendars, clear files, and so on.