Akaghi (アカギ, Akagi) is a supporting character in Suikoden IV and Suikoden Tactics. Akaghi is a ninja working under Ramada. 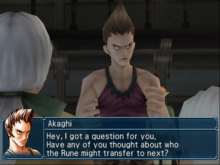 You'd be the first person with a rune attached to their hair.

Akaghi was one of Ramada's subordinates, along with Mizuki, as a member of Orark Maritime Trade. Although a ninja, he was very easily moved and prone to outbursts of emotion and was generally a kind-hearted person devoted to his companions. He and Mizuki were from the same village and although he often tried to play the protective big brother, in the end Akaghi was always at her mercy.

Aligned with the Kooluk Empire as part of Orark Maritime Trade, Akaghi and his companions came to Razril when their ship was blown off course after obtaining Rune Cannon ammunition at Middleport. Escorted by the Knights of Gaien, the group evaded a raid by the pirate Brandeau and continued on their way.

Much later, after the destruction of Iluya Island, Akaghi and his group were ordered to obtain the Rune of Punishment, ambushing the the hero in the Kingdom of Obel alongside Mizuki. The three would be defeated and captured, with Ramada surrendering to the hero. Though frustrated and confused by their surrender, Akaghi begrudgingly accepted his new situation. Although initially fearful of being caught in the wrath of the Rune of Punishment, Akaghi would soon come around to aiding the Allied Forces during the war.

As the war continued, Akaghi became more concerned with the effect the Rune of Punishment could be having on the hero, rather than any personal risk. The hero's use of the rune to destroy the suicide privateer fleet particularly affected Akaghi, who felt that regardless of the outcome, it wasn't right to force the hero to go through such an ordeal. He was also worried about Ramada's fate after seeing his bird return alone from an espionage mission at El-Eal Fortress.

Following the Island Liberation War, Akaghi and his companions would enter into the service of Lino En Kuldes. There, Mizuki and him served as personal bodyguards to the royal family, but also had to attend to mundane work like cleaning the palace and taking care of mice.

Additionally, they did intelligence work for the king and joined Kyril in his investigations of the Rune Cannons and directly reported to King Lino En Kuldes when they find out about the restoration of El-Eal Fortress. After the fall of the Kooluk Empire, he returned to Obel with Mizuki, resuming their positions at the palace.