Kyle (カイル, Kairu) is a supporting character in Suikoden V. Kyle is the cavalier, care-free member of Falena's Queen's Knights. 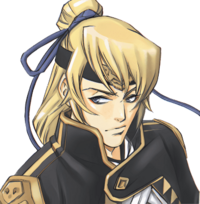 Kyle is a handsome young man with blue eyes and long blond hair, tied up into a high bun at the back of the head and a low ponytail which reaches his upper back.

During Suikoden V, Kyle mostly wears the regular full armor of a Queen's Knight; black clothing with gold trim worn over white underclothing. He also wore red eyeliner as part of his Queen's Knights regalia. Aside from the tassels, which have a tiered pattern at the top, he wears the armor in a straightforward manner.

When undercover in Lelcar, he wore a commoner outfit reminiscent of his adolescence there, a great contrast to his Queen's Knight uniform. It is a mustard-colored armless tunic over black underclothes and pants with a piece of armor covering his left shoulder.

As a result of his free-spirited life as a boy, Kyle is uninhibited and honest about his values, occasionally chaffing against the restrictions of the Queen's Knights. He sometimes wandered off when on guard duty but was overall a skill and dependable knight, capable in both sword fighting and rune magic. His swordplay was based on a loose stance, making it difficult for his opponents to read his movements.

He has a strong sense of humor and is a straightforward person who hates corruption. His tendency towards peace sometimes led him to be accused of being a Barows Faction supporter, but this was not the case.

However, Kyle is also a bit of a womanizer and has a tendency to hit on women as soon as he sees them. This trait is probably the main reason why he is seen as frivolous. This habit has been with him for a long time and many women in Lelcar still hold a grudge against him. It was considered to be enough of an issue that Ferid forbade Kyle from accompanying the royal delegation to Lunas for the purification rite there.

Kyle was an orphan in the city of Lelcar, where he would be taken in and raised by Volga. As he matured, he became known as something of a womanizer, leaving a trail of broken hearts in his wake. When he broke the heart of the adopted daughter of Lord De Beers, his habits caught up with him and he was forced to flee the city.

When the New Armes Kingdom invaded Falena in 441, Kyle would sign up with the volunteer army. His strength and tenacity in battle would catch the eye of Ferid. Following the war, Kyle would be one of the young soldiers chosen to fill the ranks of the depleted Queen's Knights. There, he would occasionally be accused of being a puppet of the Barows Faction, due to his opposition to the policies of Marscal Godwin, claims that would later prove to be unfounded.

When the Sun Palace fell to the Godwin Faction at the outset of the Sun Rune War, Kyle would rush to the Prince's side and help protect him from the attacks of Dolph and Childerich with his water rune magic. The two would be separated after this battle but Kyle would manage to rejoin the refugees in Rainwall. Although he regretted not being able to protect Arshtat and Ferid, he would decide to fight in the Imperial City Recapture Army.

Normally calm, when he had the opportunity to face Zahhak in battle, Kyle fought with tenacity and anger, furious at Zahhak's betrayal of Arshtat and Ferid as well as his tarnishing of the Queen's Knights' name. He would win the battle, securing the reunion of the Prince and Princess Lymsleia. After this Kyle would continue to fight on the forefront of the army for the remainder of the war.

Once the war ended, Kyle would retire from his position as a Queen's Knight. Instead of returning to Lelcar, he moved abroad, living a life of peace and quiet.