Zaj grew up in annexed Sanadia, a country which resisted and fell to the subjugation of neighbouring Holy Kingdom of Harmonia during a time when Harmonia was active in expanding its territory in the 420s-430s. As per Harmonian assimilation policy and similar to the treatment of Le Buque, annexed territory citizens receive Harmonian 3rd-Class citizenship, which meant Zaj, like all Sanadia children, would have been sent to affluent households in Crystal Valley to work and be educated in Harmonian ways.

Witnessing internalised hate of Sanadia and romanticisation of Harmonian values by himself, as well as his own brethren, upon his return to Sanadia at the age of 13 left Zaj with a burning desire for vengeance against Harmonia. This would propel him to undertake the membership test for the Howling Voice Guild, which, despite being over the acceptance age, he successfully qualified for. Zaj believed that the Guild offered an equal playing field regardless of one's status. Becoming a squire-class gunner and wielding the gun Tal Grund, his ultimate goal was to gain influence in both the Harmonian government and the Howling Voice Guild, allowing him to create a climate of fear and power. 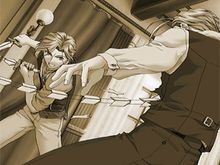 Zaj was motivated by revenge and an expensive tailoring bill.

He would maneuver himself into the most influential noble family in Harmonia, the Latkje household, as a tutor. Dedicated to his goal, he altered himself entirely; his name, Zaj, hair colour and personality as a tutor were all false. Worming his way into the family's good graces, he would eventually become engaged to Julie Latkje. He poisoned Julie's father through his guild poisons, thus getting him closer to a position of power in the household. However, when Nash, who had also spent time in the guild, uncovered his plot, he attacked Zaj on the eve of his wedding to Julie and fled, leaving him for dead.

Although Zaj was thought to be dead from the poison of the Twin Snake Sword Großer Fluss, he managed to survive thanks to the remedies of the Howling Voice Guild. Harbouring intense hatred towards Nash, Zaj manipulated events in Highland to have Nash wanted by the Highland Army. He had hoped to make it look like Nash had bungled his mission, getting him killed in action. When this plan failed, he confronted Nash in Greenhill City, looking forward to the day he would return to Crystal Valley. 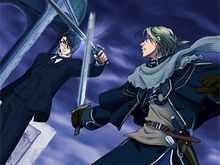 Many, including Julie, thought Zaj dead. However, Zaj survived and stepped back into the shadows, using the Howling Voice Guild to attempt to avenge his wounds at Nash's hands. He also began to cultivate a new identity for himself, allowing himself to re-enter Harmonian politics under the alias of Thanatos Crawford.

As Crawford, he would become the head of Harmonia's Temple Faction and would confront Julie, announcing that their wedding was back on. However, Nash returned to Crystal Valley and, after continuously escaping his henchmen, Zaj would confront him face-to-face at Klotzeo Church. There, he fought a fierce battle but was defeated and killed by Nash in a final duel.