Suikoden V (幻想水滸伝V, Gensōsuikoden V) is the fifth main installment of the Suikoden series and is both the ninth and tenth game released overall, along with Genso Suikoden I&II which was released on the same day in Japan. It was designed and released for the Sony PlayStation 2.

The games plot concerns a civil war in the Queendom of Falena between powerful government factions. A coup d'etat leaves the Prince of Falena and his retainers exiles before founding a loyalist force determined to retake the capital of Falena and restoring the government overthrown by the manipulative Godwin Faction.

Like other games in the Suikoden series, the player controls the protagonist and travels with him around the world map, advancing the plot by completing tasks and talking with other characters. In towns, the player can gather information, sharpen character's weaponry, learn new skills, and buy equipment; wilderness areas generally feature random encounters with monsters. Suikoden V also contains a number of minigames, including, but not limited to, fishing, Blind Man's Bluff, Checkers and more. 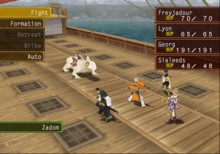 An early-game battle in Suikoden V.

Suikoden V's battle system seems the return of six person parties in combat rather than the four person parties of Suikoden IV, reversing the change made by its predecessor. Each character is individually controllable, as well, as opposed to Suikoden III. The skill system, first seen in Suikoden III, also returns. Different characters have affinities for different skills. Only two skills can be equipped to each character, though they can be switched at any time between battles. If all six characters lose all their hit points and are thus incapacitated, it is game over and the player must restart from a previous save. Exceptions exist for certain plot battles in which winning is optional; the player can lose, and the plot continues on, albeit in a slightly different fashion.

The characters can be set up in a variety of fighting formations across a 6x4 grid. Each formation allows the party to gain increased statistics, such as increased defense or increased attacks, occasionally offset by decreased stats in other categories, as well as a special attack based on the formation. New formations are acquired over the course of the game. Like in previous games, some characters have special cooperative attacks that can potentially do more damage. These attacks often do more damage than normal and cannot miss, but they also cannot receive critical damage bonuses and cannot hit targets multiple times. The damage of certain cooperative attacks depends on choices that the player has taken in dialogues in the game (e.g., Sworn protector, the attack of Lyon and Hero (Suikoden V) does more damage if the player is nice to Lyon). An auto-battle function is enabled as well for quickly breezing through easy battles.

Characters that don't participate directly in combat usually offer other services to the Prince, such as running a shop, giving clues for potential recruits, or aiding in the strategic war battles. Additionally, up to four characters may be kept in reserve of the current party; some non-combat characters, when in the reserve, offer minor benefits such as healing after battle or a greater chance of finding a special item after battle.

Runes are handled similarly to other games in the series. Characters have a certain number of spell usages per spell level with a maximum of 9 usages per level. Other runes offer different benefits, and some may be used as often as desired. Rune unites return again, but this time, rune spells can be combined on every level, not only the fourth.

The strategic war battles now take place in real-time with more freedom of movement than the hex and square based earlier installments. Instead, the battlefield is now continuous. Before starting the battle, the player has to organize the characters in units of three. Both land and naval battles exist in the game with some battles combining both elements. There are also additional benefits to having certain characters in certain units, such as magical attacks using runes or leadership bonuses. A few special units exist as well in beaver units and dragon cavalry units, which can travel on both sea and land.

Upon completion of the game, the player is prompted to make a special save file. Loading from this save file will allow the player to begin the game anew with a variety of bonuses based on their status in their first playthrough. This includes:

The following items and effects do not carry over:

Suikoden V was released for PlayStation 2 on February 23, 2006 in Japan. It had a TV commercial in Japan, 15 seconds in length and a large number of online trailers and videos compared to its predecessors. The game would be released in North America on March 21, 2006, followed by a European release in September 22, 2006. The game would be re-released in Japan on December 7, 2006 as part of the PlayStation 2 the Best series.

A KonamiStyle Limited Edition version of the game was also released in Japan for its initial launch in 2006. This limited edition would include a large 192-page "Setting Data" character and world art book, an "art board" featuring three pieces of game key art, the Genso Suikoden V Genso Shinsekai Music Collection CD, and a copy of the game with a reversible cover and special gold and white DVD. This would all come inside an A4 sized box with raised artwork of the Suikoden V logo and the Sun Rune.

As of 2021, it is the only game in the "mainline" five games of the Suikoden series not to receive a re-release on another console.

Suikoden V would earn a 32/40 score from Weekly Famitsu on its release, giving the game a Gold Hall of Fame status as a result. One point higher than Suikoden III, this made Suikoden V the highest score given to any game in the Suikoden series, until the release of Suikoden Tierkreis in 2008.

In December 2005, Electronic Gaming Monthly would begin preview coverage of Suikoden V. It noted that the series' PS2 titles failed to revitalize the Suikoden name after the charm of its PS1 days. The magazine was cautiously optimistic that the previews they had seen indicated that Suikoden V would manage to blend said charm with a modern style while avoiding the pitfalls of Suikoden IV.

Electronic Gaming Monthly would review the game in May 2005, scoring it at straight 6.5s across the board. One reviewer called it a "bad cover version" of Suikoden II but the game was generally praised as compelling, if long-winded, and certainly as an improvement over its predecessor. However, the game was also called archaic, lacking in graphical fidelity, and slow to get going.

Official U.S. PlayStation Magazine, meanwhile, would give the game 3/5. OPM would criticize the game for aping its predecessors to the point of making the player wonder if they were playing a remake, rather than a sequel (or prequel). Once again, the story was described as compelling and the game solid but lacking in style and further evidence that the series needed a shot in the arm.

Official UK PlayStation Magazine in November 2006 would be even more curt, scoring the game at 5/10 in a short review that dismissed the game as too tedious and filled with "crushingly dull text".

Suikoden V was very well received by the Suikoden fandom on release, and was frequently cited as being second to, over even superior to Suikoden II. As time passed, this fandom esteem has cooled slightly but the title remains well regarded.