She is a vampire, as well as the original bearer of the Moon Rune. She has been traveling in pursuit of Neclord, who stole the Moon Emblem some 400 years ago and fled.

Sierra's appearance is that of a pretty girl, but her behavior and words convey a power that is extraordinary. She is a vampire, over 800 years old.

She had an exceptionally pale complexion, long white hair, and unusually red eyes. She wore a purple shawl over a short blue cloak. Underneath she wore white frilly clothes, white stockings, and blue shoes. 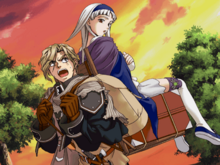 Sierra speaks in an old-fashioned way because she has lived for a long time. However, when she met Klaus Windamier, she spoke more normally and less formally, charming the young strategist. Nash Latkje considered her haughty and shameless and even coined a nickname for her, Ghostly Hag.

Sierra felt responsible for the harm done to people by vampires born from her own mistakes and so commenced a journey to eliminate her former brethren who have turned to feeding on humans. As a vampire, she has an excellent sense of hearing, and never misses a bad word that is said about her. 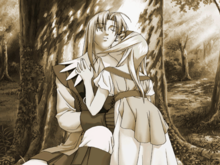 Necking in the woods

Sierra Mikain is the original bearer of the Moon Rune, discovering it in the year -375. The rune was so powerful that Sierra was able to create an entire coven of lesser vampires using the rune. Rein Penenberg was one of the first vampires she sired. Sierra and her followers lived in happiness in Blue Moon Village for centuries.

Peace continued in Blue Moon Village until about 400 years ago when a young member named Neclord stole the rune and ran away. With the rune gone, the blood lust of the vampires was now out of control, driving many to prey on humans for sustenance. Rein Penenberg was one of those who left to sate his blood lust. 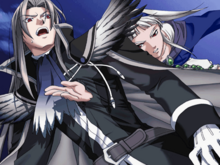 You've got to hand it to her

Sierra pursued Neclord, along with other vampires that preyed on humans. While journeying to the City-State of Jowston, she met with Nash Latkje, allowing him to accompany her as a baggage handler. With Nash in tow, the two would arrive at a large mansion and together the two defeated Rein Penenberg, the former lover of Sierra's who had turned to feasting on humans.

Later during the Dunan Unification War, when Neclord attacked Tinto Principality, Sierra joined forces with the New State Army to defeat him. Sierra was able to sense the Moon Rune's location and was able to reclaim it from Neclord at Tinto. 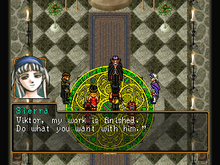 She left Neclord's fate to Viktor, confident that he would destroy the vampire. It is also possible that revenge held no use to her after having lived so long.

Afterwards, Sierra remained with the New State Army, wielding her mighty power as part of the army's special forces. Following the war, she decided to remain with humans, enjoying her people watching, feeling no hurry to return to Blue Moon Village.

Sierra is fought as an event enemy in Suikoden II. She is strong but is easily outnumbered and overwhelmed by a full party.