Sheena (シーナ, Shīna) is a supporting character in Suikoden and Suikoden II who also appears in Genso Suikogaiden Vol.2.

Sheena is the sole son of Eileen and Lepant and is somewhat of an immature playboy. Under the guise of a journey of training, he plays around in various places around the land, hitting on women and generally infuriating his father. 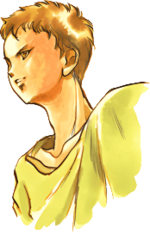 Taking after his mother in appearance, Sheena was a slight, handsome youth with blond hair and amber eyes and a prominent forehead. He wore a loose, green shirt along with black pants and brown boots.

In Suikoden II, the shirt was a buttoned affair, though Sheena always left it mostly unbuttoned and hanging from him. Under his shirt, he wore an armless burgundy body piece.

In Suikoden, he wore a low-hanging necklace, while in Suikoden II he instead wore a loose choker around his neck. 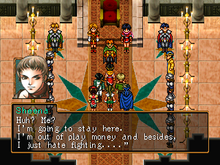 Play money and real fighting? But I want real money and play fighting

Immature and prone to skirt-chasing, Sheena was frequently admonished by his father for his continuous antics. However, it is said that Lepant himself acted no different during his own youth. Light-hearted and brimming with confidence, he flits from one situation to the next with ease.

Although he seemed entirely with care, it appears he had some semblance of justice in his heart as he generally willing to fight for a cause. He is said to have the sword skills of his father and the magical ability of his mother. Despite his flirting, he has not had a girlfriend. This is almost entirely due to his inability to focus on any one woman for long. 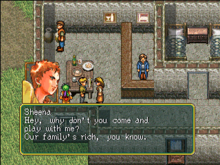 Gotta admit, it'd work on me.

Sheena is the son of Lepant and Eileen who has somewhat of a wandering eye. Sheena was spoiled by his mother during his youth and has grown up to be a rather immature man, by his father's standards. He had prodigious potential, combining the martial skill of his father with the magical arts of his mother but, rather than training, Sheena spent of his time idling and chasing women.

During the Gate Rune War, annoyed by his son's indolence, Lepant cast Sheena out into the world on a learning excursion. The youth did not take the intended project at face value. Later, Sheena was discovered flirting in Seika, boasting about his family's wealth, when he was overheard by Lepant. Unhappy at his son's playboy attitude, Lepant forced his son to join the Toran Liberation Army with the aim of making Sheena into a mature adult.

Throughout the war, Sheena served in his father's unit, shoving off his own tactical skill. Although a reluctant fighter, his natural talents and potential were evident. Following the fall of the Scarlet Moon Empire and the end of the Gate Rune War, Sheena left his parents once more, unchanged by his encounter with his father, wandering around and having a good time as usual. 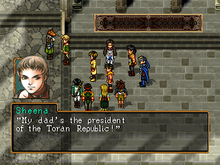 I think Sheena and Lilly would get along

During the Dunan Unification War, Sheena traveled to the City-State of Jowston. He was first spotted in Coronet Town, attempting (and failing) to solicit Tai Ho's help to cross Lake Dunan.

He would later appear at New State Army Headquarters where he offered his help broker an alliance between the New State Army and the Toran Republic. Rather than pure altruism, this offer gave Sheena the opportunity to return home and relax. Unfortunately for his plans, Lepant would grab his son at Gregminster Palace and order him to join the New State Army for the remainder of the war. 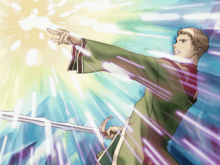 Sheena would serve as a bodyguard of the New State Army's leader. Following the war, he planned to resume his debauchery world tour but when he returned to Toran to obtain some more funs he was once again caught by his father and forced to endure his harsh training.

Following his training, Sheena would resume his idle journey, this time towards the Holy Kingdom of Harmonia, with Oulan hired as his bodyguard. In Marid Village, he would spend some time with Jonah. When a wild dragon attacked the village, he would team up Nash Latkje and others to fend it off, wielding impressive magic during the battle.