The Rune of Beginning (始まリの紋章, Hajimemari no Monshō) is one of the 27 True Runes. It is normally split into two runes: the Bright Shield and Black Sword Runes. 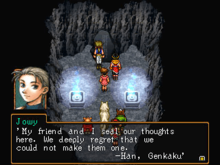 Foreshadowing... from the past!

The Rune of Beginning is said to be the rune representing sword and shield and is believed to have been present at the beginning of the world. It is normally divided into two runes: the Bright Shield and Black Sword Runes.

Along with the power of eternal youth, the rune is also said to judge order and chaos, calling back to its role as representing sword and shield. However, when separated, the rune does not provide eternal youth and the use of the individual rune's powers could end up taking the life of both bearers.

The rune is said to appear at critical turning points in history, placing the burden of destiny on two heroes. Two such heroes appeared during the war between the City-State of Jowston and the Highland Kingdom, which began in 428. The Bright Shield Rune went to Genkaku, fighting for the City-State, and the Black Sword Rune went to Han Cunningham, soldier of Highland. Realizing the danger and hardships the runes could cause, the two friends eventually sealed the runes in Toto Village.

Over 30 years later, the runes would be discovered by Genkaku's adopted son and Jowy Atreides, influencing the Dunan Unification War with the two friends on opposing sides in the conflict. This use of the rune risked both bearer's lives. Jowy Atreides was fully aware of the consequences but was determined to create a lasting peace through the rune.

Following the war, the two bearers would face each other at Tenzan Pass, with Jowy content to die to preserve peace and also to save the life of his friend. After Jowy collapsed and died, however, the rune was united once more and Jowy was revived thanks to the will and desires of his friend.