The Fire Bringer (炎の運び手, Honō no Hakobi-te), localized in Suikoden II as the Keepers of the Flame, were a bandit and resistance group which struggled against invasion by the Holy Kingdom of Harmonia on two separate occasions.

The Fire Bringer were first mentioned in an Old Book detailing Grassland culture found in Drakemouth Village in Suikoden II. The group would be referenced again in the first chapter of Genso Suikogaiden Vol.2 and would go on to play a prominent role in both the backstory and the main plot of Suikoden III. 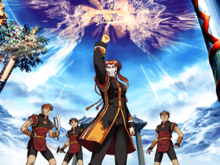 The bandit Clant attempted to use the name of the Fire Bringer for intimidation purposes.

The Fire Bringer were originally a small band of thieves, led by the Flame Champion that operated in the Grassland during the 420s. When this group began to resist the Harmonian invasion of the Grassland, other groups and rebels began to gather under its banner. The Duck Clan is noted in history for being the first of the Grassland clans to join the Fire Bringer and other clans would soon follow suit increasing the groups size with each new clan added. This would eventually make the Fire Bringer the grand allied force that united the Grassland against their common foe.

Following the final battle against the Harmonian army, in which the Flame Champion's True Fire Rune went out of control, decimating both armies and forcing a truce between the two powers, the Flame Champion disappeared, and the Fire Bringer was dissolved.

Since then, the Fire Bringer passed into legend, known for their fight against Harmonia and their stealing of a True Rune from the One Temple in Crystal Valley. Groups of bandits that plague the Grassland since have occasionally taken up the name of the Fire Bringer, but these groups of thieves are generally considered as fakes, unworthy of the title.

Once such band of outlaws attacked Milit Village shortly after the end of the Dunan Unification War in 460 but were exposed and thwarted by Nash Latkje, Camus and Miklotov among others. 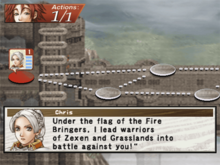 The Harmonian invasion of Grassland would spark a revival of the Fire Bringer.

With True Fire Rune in hand, the new Flame Champion was able to unite the disparate forces of the region against Harmonian invasion once, reforming the group and instilling new confidence and belief after the individual components of the new force had been defeated time and again by the Harmonian Army. This new Fire Bringer was not only made up of the Six Clans of the Grassland but also of Zexen, forces from the Tinto Republic, the Kamaro Alliance of Free Knights and others.

After stopping the invasion by repelling the Harmonian advance at Brass Castle and, more importantly, thwarting the Destroyers plans that would have decimated the region, the new Fire Bringer would disperse.