Neclord (ネクロード, Nekurōdo) is an antagonist in Suikoden and Suikoden II. Neclord is a vampire with a penchant for taking victims as his brides.

Neclord was a vampire who betrayed his brethren and cursed them to a painful death or a life of feeding on humans when he stole the Moon Rune from its shrine in the Blue Moon Village. Since then, he has been hunted by the original Moon Rune bearer, Sierra Mikain.

Neclord traveled the land, striking villages with his powers, including the creation of zombies, and kidnapping women to be his "bride" before feasting on them. North Window, the hometown of Viktor was one such victim of his massacres, inspiring a life-long pursuit of revenge. In SY 449, he would choose Daisy as his 65th bride, taking her and destroying the village in the process. Viktor would attempt to rescue Daisy but would be swiftly defeated and left for dead. Daisy's subsequent taking of her own life merely bemused him. 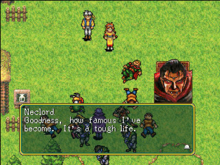 I bet it's not so bad when that sweet influencer money comes in every month.

Other victims also became dedicated to his demise, such as the Marley family of vampire hunters. During the Gate Rune War, Neclord was appointed as the magistrate of Lorimar as he was an old comrade of Windy. There, he would kill the Imperial officers under his charge, turning them all into loyal zombie minions.

Neclord traveled to Warriors' Village and attempted to take Tengaar as one of his brides. The Toran Liberation Army attempted to stop him but were defeated without landing a single blow. However, the army would learn of the Star Dragon Sword, and obtaining it, were able to defeat the vampire.

However, despite appearances, Neclord had not, in fact, been killed. Neclord had used his "Doppelganger Secret", a technique that meant that the Neclord felled during the Gate Rune War was not the real Neclord. He would reappear at North Window during the Dunan Unification War before disappearing when confronted by Viktor.

Neclord would later appear in Tinto Principality, intending to overrun the region and establish his own undead kingdom. He would also kidnap Lilly Pendragon to be his bride, as well as Lo Wen, seemingly for sustenance.

With the help of Kahn Marley, Sierra Mikain and the Star Dragon Sword, the New State Army was finally able to nullify Neclord's doppelganger secret, seal and remove the Moon Rune and strike him down once and for all. His last moments exposed the pitiful nature of Neclord as he begged for his life before being struck down by the Star Dragon Sword.

Neclord is fought as a boss enemy in both Suikoden and Suikoden II. In both games, he proves to be undefeatable in your party's first encounter before being stripped of his invulnerability in your rematch.

In both games, he is a powerful magic user who can inflict the Poison status on your party.