Sydonia (シドニア, Shidonia) is a supporting character in Suikoden. Sydonia is a bandit of few words with a unique teleportation ability.

Sydonia was raised as a spectacle in a traveling show, lured away from his parents as a child, due to his unique teleport powers. He could teleport short distances by concentrating on his left hand.

One day, that group would be raided by Guin's bandits. Initially distrustful, he began to open up to Varkas who ensured his safety in captivity, even having his collar removed by Lee. He disliked his name being used as it was also the word used to activate the magical shock collar that kept him in check, when the person speaking it held a ring magically connected to the collar.

When he learned that the acrimony between Varkas and Guin had spilled over into physical confrontations, he offered to teleport to Guin at night and stab him to death. Varkas would dismiss the idea, not wanting Guin to die, and also not wanting to use Sydonia's power as a tool.

When Guin poisoned Varkas and then tried to murder him, Sydonia would use his teleportation to stop Guin from reaching his blade. Varkas would strike down Guin, and Sydonia and Lee would have Hodai cure Varkas. Since then, he has worked under Varkas in the group, as his second-in-command. 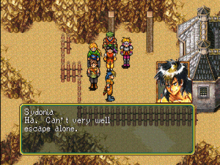 Couldn't you teleport and then untie Varkas?

Sydonia's teleporting has earned him the title of "Marksman Sydonia." The bandits would attack Scarlet Moon Empire officials around the area of Rockland. He is extremely taciturn, with Varkas being the only person he is willing to communicate at any length with.

Following the end of the Gate Rune War, Sydonia was invited to join the Toran Republic Border Guard by Varkas, but Sydonia simply disappeared.

Sydonia is fought in Suikoden as part of the game's second boss battle. He fights the party alongside Varkas. As Varkas is slightly more durable than his comrade, it is best to defeat Sydonia first, to reduce the enemy's number of actions.