Subala (スバル, Subaru) is a supporting character in Suikoden V. Subala is a Raftfleet fishing master and the arch-rival of Lun. 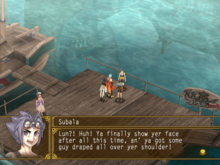 The only thing that should be draped over your shoulders is fish!

Subala was the self-proclaimed fishing master of Raftfleet. She was a rough, coarse, and energetic young woman who wasn't afraid to brag about her skills. Those skills were ample as, despite her slender frame, Subala could pull up enormous fish in as if they were nothing. Her skill at fishing was well admired; the famous chef Retso even used to buy fish off of her to serve in his restaurant.

In her youth, she was a close friend of Lun but the two had a falling out and have been fierce rivals ever since. Subala claims that this animosity exists because as children, Lun stole Subala’s first love away. However, Lun denies this ever happening. Subala still treats Lun's mother, Kisara, with respect, however. 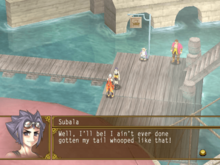 Subala became involved in the Sun Rune War upon encountering the Prince in Raftfleet while accompanied by Lun. Subala was already mad that Raftfleet had moved without anyone telling her while she was gone and seeing her rival with a pretty boy only increased her ire. When the Prince asked her to join the Imperial City Recapture Army, Subala stated she would only join him if he could prove he was the better fisherman. Having an unfair advantage in Raftfleet, Subala offered to move the competition to Ceras Lake. Amazingly, he managed to beat her – and so Subala joined him, helping to feed her new allies with her proven fishing talents.

After the war ended, Subala returned to her job as a fisherwoman, this time in search of the Big One. Though one day she disappeared at sea, everyone's faith in her abilities reassures them that she's safe.