Kyril (キリル, Kiriru) is the main protagonist from Suikoden Tactics. Kyril is a bright, honest young man who wishes to destroy Rune Cannons in order to prevent the loss he experienced from happening again. 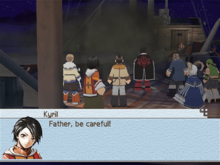 Kyril, I told you to stay in your room!

Kyril was a kind-hearted young man who was an obedient child. He was the son of Walter and Yohn, although Kyril would not come to know his mother's identity until later in life. As a child, he would travel with his father, Yohn, Andarc and Seneca in investigating Rune Cannons in the Island Nations region. Following clues and rumours would lead them into a confrontation with Steele when Kyril was 15, a pirate said to have a special Rune Cannon.

In the ensuing battle, Walter would be caught in the Evil Eye's blast, transforming him into a fishman and forcing Andarc to strike him down to prevent him from harming Kyril. Steele would then use the Rune of Punishment, destroying the surrounding area and wounding Kyril seriously. The loss of his father in front of his very eyes, traumatised him for many years and led him to develop a complex about seeing the people he cared for put in danger. His physical wounds also took some time to heal. It would be three years before Kyril would feel ready to resume his father's journey.

Following in his father's footsteps in investigating Rune Cannons and the Evil Eye, his journey would take him to the Kooluk Empire where he would become increasingly involved in the political struggles there after meeting the Princess Corselia. He would find himself fighting against Iskas, who hoped to use the Evil Eye to take over the country, as well as agents from his homeland, the Scarlet Moon Empire, who hoped to use such weapons for their own ends. 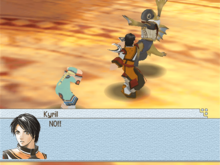 A side-affect of Kyril's trauma was that he was unable to kill any fishmen he was forced to fight, due to the resemblance to his transformed father. He would be forced to overcome this when a transformed Martin lunged at Corselia. Striking Martin down and essentially reliving what had happened years before, this time in Andarc's role, forced Kyril to move on from this mental block.

Kyril would be able to defeat Iskas, finally halting his plans at the Secret Patriarchal Facility. The Evil Eye there would then suck him into a different world where, guided by the soul of his father, Kyril was able to destroy the Evil Eye once and for all. It was then that Kyril would learn that Yohn was his mother. Finally being able to talk to both his parents, Kyril was invited to follow Walter and Yohn to their world but refused. He would return safely to his friends and companions, in the ruins of the Patriarchal Facility.

Following the collapse of the Kooluk Empire, Kyril would journey alone, seeking out remnants of the Rune Cannons left in the world, never aging. Corselia and Simeon would try and track him down, seemingly without success.