Leknaat (レックナート, Rekkunāto) is a character in Suikoden, Suikoden II, Suikoden III, Suikoden IV, and Suikoden V. Leknaat is a mysterious, blind seer with an interest in the 108 Stars and holds possession of the back half of the Gate Rune. 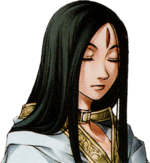 Leknaat is a tall, slender woman with dark hair that reaches all the way down her back, to her feet. As her eyes are always shown closed, her eye color is unknown. She has some sort of jewel prominently placed in her forehead.

After fleeing from the massacre of the Clan of the Gate, she would wear a mask while traveling. Luc would later wear this mask as the Masked Man during Suikoden III.

Leknaat is always shown in a hooded, white robe with yellow trim. The robe is worn over a similar colored dress. The exact details of her outfits change, but she is normally shown with pink detailing on her robes and a pink tabard. The tabard is not worn during Suikoden IV. Her feet are mostly hidden by her robes, but she appears to wear navy blue shoes.

She is usually shown with at least one bracelet worn on her left wrist. In the first three Suikoden games, she wears a gold choker on her neck. Suikoden IV shows her without any neck adornment. In Suikoden V she wears a more ornate choker.

Leknaat is a blind seer who survived the massacre of the Clan of the Gate by forces from the Holy Kingdom of Harmonia. She and her clan sister, Windy, used the power of the Gate Rune in order to escape. Leknaat and Windy each took one half of the Gate Rune, Leknaat receiving the "back" or "exit" half of the rune in her chest. 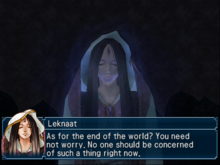 Wait, you brought up the end of the world, not me!

She would become known as the "Keeper of Balance" and would dedicate herself to this maintaining of balance in the world. Where exactly she received her knowledge of the 27 True Runes is uncertain but she would appear infrequently to offer advice and guidance to those who bore them. During the Island Liberation War, she would appear to the bearer of the Rune of Punishment on several occasions and even confronted the Fog Ship Guide, returning him to the Eternal City.

Intending to keep the balance of the world, Leknaat isolated herself on Magician's Island. Leknaat also became the Seer of the Scarlet Moon Empire, preparing Astral Predications for them and took on an apprentice, Luc, after rescuing him from his imprisonment in the One Temple.

In the events of the Sun Rune War, Leknaat appeared several times before the Prince to impart her wisdom on the nature of the Dawn Rune, as well as its counterpart, the Twilight Rune, and the Sun Rune itself. She first appeared at Ceras Lake following the occupation of Doraat by the Imperial City Recapture Army. Noting that Zerase was present, Leknaat asked her to help the Prince on his quest before vanishing after giving a cryptic message about the three runes of Falena.

She reappeared once again in the Deep Twilight Forest ruins, where the Prince had headed in the hope of increasing the power of his Dawn Rune in order to save Lyon. She let the party know that the visions seen in the Sindar ruins were visions of the past while noting that encounters with the Sun Rune were in the near future. She refused to answer Zweig's questions, much to his, and Lorelai's, disdain.

Leknaat appeared for the final time in Falena after the defeat of the Sun Rune Incarnation, summoned by Marscal Godwin. She noted that the power of the Dawn and Twilight Runes changed the nature of the Sun Rune from a destructive force to a nurturing force, allowing for the revival of Lyon.

Following the end of the Gate Rune War, Leknaat moved away from Magician's Island with Luc, passing on her role as seer to Hellion.

During the Dunan Unification War, Leknaat would appear to offer advice to the bearer of the Bright Shield Rune throughout the conflict, helping to guide the hand of fate. She would also gift him the Tablet of Stars and her apprentice, Luc. At the end of the conflict, she would appear before the Bright Shield Rune bearer and Jowy Atreides, praising their efforts throughout the war.

In the years after the Dunan Unification War, Leknaat would teach both Luc and Sarah after she was rescued from the One Temple by Luc. Despite being Luc's mistress for many years, she could not heal Luc's soul from the visions of the Grey World. Before the War of the Champions, Leknaat tried to prevent Luc from carrying out his plans but was unable to with her half a True Rune. In the end, it was left to the Fire Bringer to fight for fate.