An adopted noble from Kyaro Town. Jowy Atreides is a close childhood friend of the hero and Nanami as well as a skilled martial artist. He becomes the bearer of the Black Sword Rune, one half of the Rune of Beginning.

Jowy is a young man of slender build, with grey eyes and long, blond hair usually tied into a long ponytail. He usually wore a blue armless top, white pants with a mustard sash belt, and similarly colored boots. He also wore brown bracers on his arms.

After his return to the Highland military, Jowy would wear an mostly white outfit, with a long white coat and white boots over black pants and a blue undershirt. His normal weapon was a long, blue staff with silver dragon heads tipping both ends, although as a Highland officer, he carried a sword. 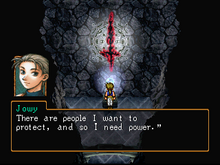 Great! Love this for you! Bound to go well!

Jowy was regarded as a peace-loving idealist by many, but was nonetheless prepared to betray his own morals to make his dreams a reality.

Although he did truly hate Luca Blight for his cruelty and evil deeds, Jowy was also fascinated by his strength and hoped to procure a similar strength that he could wield to protect others, not destroy them. In the end, Jowy's convictions led him to the conclusion that only power could establish a peaceful land.

Living in a loveless household, where even his mother could not openly show him much affection, Jowy always harbored an enviousness towards the home life of the hero, Nanami, and Genkaku. They were not related by blood, yet cherished each other regardless. 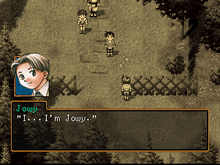 But you can call me Little Lord Fauntleroy

Jowy was not an Atreides by birth, but rather the result of a previous relation his mother, Rosa, had before marrying Marcel Atreides. As such, Jowy was never fully accepted as a family member by his stepfather or stepbrother. Despite this, Jowy had a relatively happy childhood thanks to his friends; the son of Genkaku and Nanami. Young Jowy also held a crush for the young Princess Jillia Blight.

Jowy entered the Highland Army's youth division, the Unicorn Brigade, along with his friend and was eventually assigned to Tenzan Pass following the truce between Highland and Jowston. Following the massacre of the Unicorn Brigade by Luca Blight, Jowy washed up in Jowston and was rescued in Toto Village by Joanna, Marx and Pilika. He then went to rescue his friend who was being held by Viktor and Flik but ended up being captured as well. 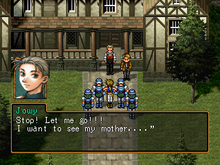 I hope your mother's a good attorney

Eventually, the duo escaped and returned to Kyaro Town only for Jowy to be rejected by his family. Led away by Highland soldiers, Jowy would cry out to see his mother, only to be rebuffed by Marcel and Marco. This would be the last time Jowy would see his family. He and the hero would then be marched through Kyaro as captured spies. Passing through, the carriage of Princess Jillia stopped the procession and interrogated the two as to their motives. Jowy would protest their innocence during this first meeting between the two.

Jowy would be sentenced alongside his friend to be executed as spies. Luckily, they, along with Nanami and Mukumuku were rescued by Viktor and Flik. Jowy ended up working alongside Viktor's mercenary force and aided Jowston in their struggle against Highland. Following the fall of Viktor's Mercenary Fortress, Jowy received the Black Sword Rune, half of the Rune of Beginning, in the ruins of Toto, while his friend gained the Bright Shield Rune. 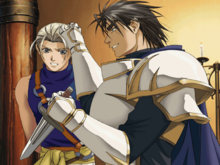 This knife is yours, for free, with our special "Stab the Mayor of Muse" promotion running right now

Making their way to Muse City, Jowy and his friends would be arrested and imprisoned for trying to enter the city using Alex's pass. That night, while Nanami and Pilika slept, Jowy spoke with the hero, vowing to do whatever it took to prevent the horrors of war befalling those he cared about.

When confronted with the lack of unity and constant infighting between the individual City-States of Jowston, Jowy felt that it would be unable to repel Highland and he began to feel that the only way to save the City-State would be to destroy Highland from within. And so, on an infiltration mission near the Highland border, Jowy was captured and decided to work under Luca Blight.

Upon returning to Muse, seemingly to rejoin with his friend and Nanami, Jowy acted more and more secretive and suspicious. This behavior culminated with him assassinating the mayor of Muse, Anabelle, in a bitter struggle before fleeing. 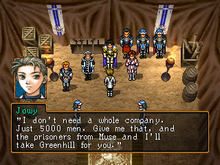 Following Solon Jhee's execution, Jowy volunteered to command the Highland siege on Greenhill City. Using the City-State's noted internal friction, he would release the Muse City prisoners of war to Greenhill, causing a strain on supplies and priorities that would eventually cause Greenhill to fall without a fight.

The hero would infiltrate Greenhill City in order to locate and rescue Teresa Wisemail. During the mission, Jowy would encounter his old friend again. He tried to warn his friend off of continuing his fight, promising that he would take care of Luca Blight and the ambitions of Highland. With his friend's refusal, Jowy began to realize the two were truly on different paths now. 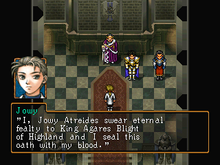 I'm just gonna poison my own blood and if you drink it, that's on you

Letting his old friends escape almost gave Rowd an opportunity to eliminate the young upstart but Culgan and Seed would ward Rowd off. Aware of Jowy's desire for true peace, the two generals pledged themselves to him. This was the moment when Jowy, who has been fighting a lonely battle, gained some true friends in his cause.

After achieving success in Greenhill, Jowy requested the hand of Jillia Blight in marriage. He won Luca's trust by planning a foolproof assassination of Agares Blight, whereby he poisoned his own blood prior to the traditional Knight's Oath ceremony. When Agares drank the blood-infused wine, as was tradition, he quickly fell victim to its effects, thus giving Luca the throne.

But Luca's kingship did not last long. Conspiring with Leon Silverberg, Jowy cooperated with the New State Army, under the command of his friend, to murder Luca. 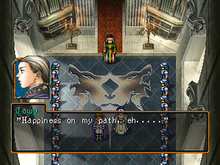 Damn, at least pretend you're enjoying this

After Luca's demise, the marriage ceremony between Jillia Bright and Jowy took place, with Jillia gifting him the title King of Highland. Though he knew that his was an inglorious path, Jowy was committed to following it to the end, both for those who believed in him and those who had fallen victim to his plots.

At this point, however, Jowy felt that any attempt at peace would be futile with tempers raging between the citizens of both nations and so made it his goal to unite the Dunan region under the flag of one nation in order to bring peace.

Although aided by Leon Silverberg, Jowy gradually began to lose ground during the war, partly because he found himself unable to execute some of Leon's more ruthless tactics and also because his body was weakened by the Black Sword Rune, which he was using to restrain the power of the Beast Rune that Luca had sought to unlock. 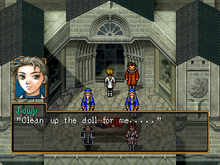 In one brazen attempt to shore up Highlander morale, Jowy would appear to ritually sacrifice Jillia to the Beast Rune in front of a crowd of cheering soldiers. Although 'Jillia' in this case was a well-made mannequin provided by Leon, Jowy found the entire exercise tasteless, if a necessary piece of theater.

Eventually pushed back beyond its pre-war borders, the Highland Army made one final stand at L'Renouille before being defeated. As the end of the war loomed, Jowy would meet one final time with Jillia and Pilika. Securing the safety of Jillia and Pilika by making a residence for them in Harmonia, Jowy spent some final tender moments with them both, before escaping to Tenzan Pass where he awaited his friend and prepared to fight him in one final battle. 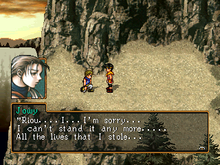 You can hear Anabelle cheering from the afterlife

At Tenzan Pass, however, the hero refused to fight, and took several harsh blows from Jowy before the latter collapsed, dying from his overuse of his Black Sword Rune. At this stage, Jowy was prepared to die in order to enhance the hero's legend and increase the chances for a lasting peace. Fortuitously, Leknaat appeared and used the power of the 108 Stars to heal Jowy's body. Finally the long conflict between the two friends had come to a resolution.

The two returned to Kyaro where they were reunited with Nanami, who both Jowy and his friend thought had perished at Rockaxe Castle. With the three best friends reunited at last, the group set off on a journey to see the world. 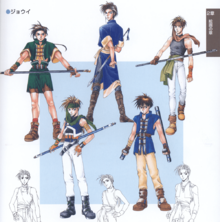 Initially, Jowy was shown in his designs as quite wild because he was older than the hero and was intended to be a delinquent-type character. As the characterization was finalized, Jowy's design became more lean and sympathetic-looking and his clothes changed to blue, in order to contrast with the red outfit of the hero. In early drafts, Jowy was wearing the same shoulder cloth as the hero but this design element was dropped.

After his return to Highland, Jowy wears white, the color of the Blight royal family. However, a blue garment is visible on his chest, as if to show his inner heart and the belief that surrounds it.

As the main character's weapon was decided to be a tonfa, a Chinese weapon was chosen to match it for Jowy. There were several proposals, including a sword, a spear, and a tonfa like the hero's. Eventually the staff was chosen. Jowy twirls the staff over his head and then swings down at his enemies in a characteristic motion.