Graham Cray (グレアム・クレイ, Gureamu Kurei) is the primary antagonist of Suikoden IV. Cray is a former strategist of the Scarlet Moon Empire now working to further the Kooluk Empire's Southern Expansion Policy for his own ends. 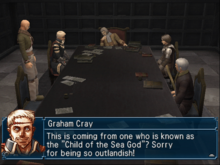 This is Cray in "charm mode".

Graham Cray served in the Scarlet Moon Empire where he served as an aide to Elenor Silverberg. At some point, he would inherit the Rune of Punishment and desperate to rid himself of the rune’s cursed influence, he would end up severing his left arm, which he would later replace with a prosthetic. The Rune of Punishment would then pick Cray’s young son as its next host.

Cray attempted to keep his son’s affliction under control but during the Man-Hunting Incident, Cray’s border village was attacked and his son perished using the destructive rune to decimate the attackers. Cray would be held responsible for the incident and exiled from the Scarlet Moon Empire.

With the loss of his son, Graham would become obsessed with reclaiming the Rune of Punishment in order to connect with his son again through the rune’s curse. He would establish the sinister Cray Trading Company in order to expand his information and resource network, eventually becoming known as the feared “Merchant of Death”.

In order to track down the Rune of Punishment, he began to work with the Kooluk Empire, lending support to their Southern Expansion Policy and instigating the Island Liberation War. He would work with El-Eal Fortress's Governor and encouraged him to aid in the search for the True Rune, ostensibly for the Emperor to gift to Harmonia in exchange for military backing. 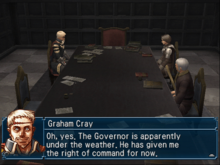 For our safety, the Governor has been placed in super double self-isolation.

When Cray's subordinate, Ramada, reported on his encounter with the pirate Brandeau, Cray began making plans to ascertain the rune's location. When he had finally confirmed the rune had returned to the Kingdom of Obel, he had Ramada attempt to take it from its bearer without any regard for the loss of life which would be incurred to transfer the rune back to Cray.

As a key figure of the Kooluk forces during the war, it was Cray who laid out the plans for the giant Rune Cannon at El-Eal and also ordered the destruction of the surface of Iluya Island, as a demonstration of its power. He was dismissive of Troy's efforts throughout the war, mocking his title of "Child of the Sea God".

As the war continued, Cray would discover Ramada engaged in espionage at El-Eal. Confronting his former spy and demanding to know why he had gone silent before returning now, Ramada tried to convince Cray he had gone into deep cover and was now returning with valuable information on the Rune of Punishment. Unwilling to trust him, Cray would shoot Ramada with a poison dart from his prosthesis and leave him for dead in the basement of El-Eal. 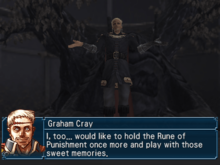 I, too, wish to hang out in purple fog with dust people.

But for all his efforts, the Empire could not defeat the combined forces of the Island Nations, guided by his old mentor, Elenor Silverberg. Although Cray was apparently unaware of Elenor's full involvement until she confronted him herself during her covert mission to deactivate the giant Rune Cannon in preparation for the Final Engagement. He would attempt to kill Elenor with a poison dart but Ramada, who had survived his attack previously, would take the dart instead. Following this, Elenor's infiltration team would fight Cray, forcing him to retreat.

After the 1st Kooluk Fleet was defeated in the final battle, Graham Cray would be confronted by the hero atop El-Eal. There, he would explain that he wanted the Rune of Punishment back so he could indulge himself in its memories. He also explained that he saw the role of the Island Nations as to help fulfill his, and Kooluk's, destiny, nothing more. He would activate the Giant Tree, hoping to at last regain the rune he saw as his by right.

However, when the Giant Tree was defeated and began to break apart, exploding violently, the fortress began to collapse around him, leaving his dearest wish unfulfilled. He was presumed to have died in the collapse of the fortress, having been last seen in a confrontation with his mentor, Elenor, amidst the crumbling rubble.

Graham Cray is fought as the penultimate boss of Suikoden IV. He is fought by the player's secondary infiltration team at El-Eal Fortress, meaning the hero and the party chosen to accompany him is not available for this battle.

Cray fights mainly as a physical bruiser, and holds a slight susceptibility to physical attacks over magic attacks. He also holds a slightly greater than average resistance to all attack elements, but especially lightning and darkness magic.