Klaus Windamier (クラウス・ウィンダミア, Kurausu Windamia) is a character in Suikoden II. Klaus is a tactician who served both the Highland Kingdom and the Dunan Republic. 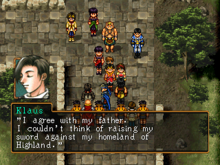 Oh give it two or three minutes, Klaus.

Klaus is the brilliant son of Kiba Windamier. He was said to have admired his father from an early age, but his slight build made him ill-suited for military life. In terms of look and temperament he was said to taken after his mother. This led to Klaus often staying in and studying alone.

At the age of 14, Klaus would accompany his father on a patrol where he would be taunted by a soldier for his perceived weakness, especially in comparison to his father. The two would duel at night, with Klaus easily being outmatched physically. Having to use his brains, Klaus would keep one eye shut, pretending it was hurt in the brawl. Knocking the torch to the ground, Klaus' eye was adapted to the darkness, enabling him to overcome his opponent. This was Klaus' introduction to the use of strategy in battles.

His uncle Greg would gift him a Harmonian-edition of the book, "Chronicles of Harmonian Heroes", which allowed Klaus to learn of Soledt, the blind strategist. The Highland version of the book had never included chapters on military strategists, merely great warriors. Learning about the vital role strategists could play, he would petition his mother to enroll him at the Soledt Academy in the Holy Kingdom of Harmonia.

Following his return to Highland, Klaus became a tactician in the 3rd Royal Highland Company serving under his father during the Dunan Unification War. Klaus participated in the attack on Two River City, where he attempted to gain Two River's surrender without a fight by exploiting the tensions within the city, as well as the capture of South Window Principality.

Following the end of the Dunan Unification War, Klaus remained in the Dunan Republic to receive training as a military strategist under Shu. Once Shu retired from the position of Chancellor in 461, following Teresa Wisemail's ascension to the presidency, Klaus would serve as Chancellor of the Dunan Republic, though he would occasionally visit Shu to consult him on national affairs.