Dario (ダリオ, Dario) is a supporting character in Suikoden IV and Suikoden Tactics. Dario is the impulsive, self-proclaimed right-hand man of Lady Kika. 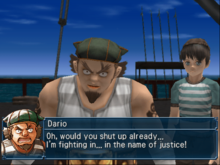 Dario was a pirate serving under Kika as well as her, self-proclaimed, right-hand man. He's also the father of Nalleo and although they have a true parent-child bond, Dario had not confided in him that they are not blood-related nor the identity of his mother, Louise.

Thinking with his heart over his head, Dario was often a source of strife for Kika, Sigurd and Hervey due to his hot-temper and propensity to start fights. Still, his blunders were usually forgiven as Dario's motivations were usually pure and in pursuit of justice.

He would be hired by Ramada to lead an attack on Razril, following the death of Brandeau, though Dario was not aware of Ramada's motive to test the Rune of Punishment. After initially being repelled, Dario would mount a counterattack only to be forced into a full retreat by Glen's use of the Rune of Punishment to decimate the pirate fleet.

Dario would fight against the hero following the hero's move to the Kingdom of Obel, as Dario thought he was hunting mermaids, seeing Lilin aboard his vessel. Dario would be defeated and then swiftly chided for his rash actions by Kika, Sigurd, and Hervey, withdrawing.

Still, Dario held no animosity about these battles and gladly joined up when Kika aligned herself with the Allied Forces. He would serve faithfully throughout the Island Liberation War, inspiring not only his son but Rakgi as well. He was also surprised to see Louise again and harbored no real animosity but made sure to state that he would never give Nalleo up.

Aboard the Headquarters Ship, he wrote an occasional advice column for Perrault's newspaper, titled 'Dear Pirate Dario'. One question, from a mysterious "Hervev", seemed to indicate that as Hervey's senior, Dario would abuse his senior status by having Hervey cook for him and massage his feet. Though Dario did not seem to recognize the situation described, instead advising "Hervev" to assault the impetuous "Mr. D".

Following the war, he continued to train Nalleo while returning to service under the command of Lady Kika.