Axel (アクセル, Akuseru) is a supporting character in Suikoden IV and Suikoden Tactics. Axel is a fiery, young warrior of Na-Nal Island. 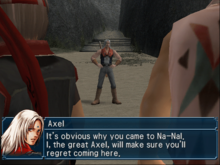 Axel knew the Manspreading Police would one day find him.

Axel was the proud, hot-tempered son of the Na-Nal Island Chief. His stubbornness often led him to make hasty decisions. Like most of the Na-Nal human population, he held a bias against the elven population of the island. Out of all the warriors of Na-Nal, his strength was second only to his father's.

When the leader of the Allied Forces set out to liberate the Island Nations from the Kooluk Empire, Axel and his father initially refused to help, preferring to cooperate with the Kooluk forces led by Troy. Upon the arrival of the hero and Lino En Kuldes on the island and their confrontation with Kooluk troops, Axel would apprehend the group. 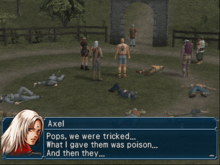 This is why you don't take an open Elven Remedy from a stranger.

Axel and his father would then offer the allied representatives their freedom in exchange for the Elven Remedy kept by Na-Nal's elves. Following the completion of the task, Axel would deliver the remedy to the Kooluk soldiers previously injured before attempting to escort his charges back to their ship.

Before he could, however, Axel and his prisoners would be taken prisoner in turn by Selma. Eventually escaping with Selma's help, Axel would discover that the Kooluk had slaughtered the Na-Nal natives for their perceived culpability in poisoning the Kooluk garrison on the island. The Elven Remedy had been a setup by the Elven Elder to combat the Kooluk occupation.

Inconsolable at the massacre, Axel would eventually agree with his father's decision to support the Allied Forces and would be sent to join the crew of the Headquarters Ship as their official representative. Although undeniably inexperienced, Axel was certainly a skilled warrior. Following the Island Liberation War, he would succeed his father as Chief of Na-Nal.

Two years later, Axel was one of the warriors Lino En Kuldes sent out to support Kyril after the discovery of the restoration of El-Eal Fortress. He still bore heavy resentment against the Kooluk Empire and claimed that he would never forgive them for their occupation of his home island and the slaughter of his people.

Axel also wanted to further the negotiations between elves and humans on Na-Nal, having thawed on his past biases, promising that Selma and he would seriously discuss the rebuilding efforts of the island after the fall of the Kooluk Empire.