Sarah (セラ, Sera) is an antagonist in Suikoden III. She is a powerful magician entirely devoted to Luc.

Sarah has pale blue eyes and long blond hair, pulled back and tied so that it hangs just below her face. She wears earrings on both her ears.

Sarah wears a blue and white tunic over a long, floor-length black dress with white trim. She also wears black shoes. It is a feminine design that gently fits her slender body. The cool colors of her outfit reflect her quiet and reserved personality. Both sleeves are made in three-quarter length so that they do not get in the way when chanting magic.

Her weapon is a black staff. At the tip and end of the wand are two light purple magic orbs. When she uses magic, these two orbs collect her tremendous magic power and release it at the target. Her weapon names reflect her mastery of illusory magic.

Sarah is a kind-hearted magician skilled in a number of rare and unusual forms of magic including teleportation, summoning and illusion magics. She is also able to sense the location of Sindar sites and can read and speak Sindarin.

Though she was utterly devoted to Luc, Sarah felt great guilt for the loss of life that his plans would entail and would even talk with Luc about whether their actions were necessary. Although she always loved Luc, she knew that there was no way for her to enter his empty heart. Even so, she continued to be devoted to him, seeing the loneliness in him that she experienced before he rescued her. 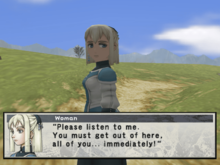 No context warnings usually do not go over well.

Sarah was born in a small, nameless village. She was born bearing a Flowing Rune and her natural magical abilities led to her persecution from people who hated and feared her as a "witch". When interested parties within the Holy Kingdom of Harmonia heard of her powers, she was taken away.

Her main role was to gather intelligence about other countries and explore the Sindar ruins using her abilities, but even in Harmonia the priests feared her talents and so she was forced to live in isolation at the temple. She was treated more as a magical object than a human being in Harmonia.

When she was 7 years old, Luc traveled to Harmonia wishing to know more about these "witches". He discovered her presence in Crystal Valley and helped her to escape, taking her to Magician's Island. There, she lived under the tutelage of both Leknaat and Luc. Luc's actions inspired a deep devotion from Sarah, which would develop into love as the years passed. It is this love and devotion that drove Sarah to aid Luc in his attempt to overcome the burden of the True Runes, an attempt to save his soul. 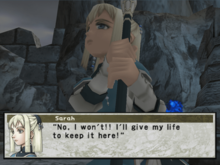 Despite her willingness to aid Luc in his plans, she harbored heavy guilt towards the loss of life his plans entailed. This led her to attempt to limit casualties when she could, such as her attempt to warn the Karaya Clan to abandon their village.

Following this, Sarah then set up a "wrath" ward around the entire village. This ward amplified the sensation of anger in the Zexen Knights and Karayan warriors, and they fought fiercely as part of Luc's plot to intensify the war between Zexen and the Six Clans.

When Yuber attacked Hugo at the Ancient Highway, Sarah would return to call Yuber away, simply as she didn't wish for anyone to die needlessly. Later, Sarah's greatest fear almost came through at the Sindar Ruins when the True Water Rune went out of control. Finding Luc wounded, she would be greatly unsettled and help him escape.

Luring Chris Lightfellow to Kuput Forest to acquire her True Rune, Sarah stated she couldn't stop Luc even if she wanted to and that Chris' claims of justice were helpless in the face of power. At the Ceremonial Site, she would admit to Chris that she knew the heavy cost Luc's actions would take if he succeeded but insisted that he was fighting against the end of the world.

She never hesitated to help the object of her devotions and fought to protect him at the Ceremonial Site in the final actions of the War of the Champions. Following Luc's defeat, she refused to abandon him in the collapsing ruins, citing her devotion as well as her culpability in causing the war. She would die holding Luc in the collapse of the Ceremonial Site, lonely but content.

Sarah is fought multiple times as a boss enemy in Suikoden III. She can be fought up to eight times over the course of the game. She is the main healer of whatever battle party she is in, making her a priority target in any encounter.