Flik (フリック, Furikku) is a character in Suikoden and Suikoden II who also makes a cameo in Genso Suikogaiden Vol.1.

Flik is a mercenary who joined both the Toran Liberation Army and the New State Army. A skilled swordsman known as the Blue Lightning, he's originally from the Warriors' Village. Though technically still on his trial of manhood, he fights to create a peaceful world for his love. 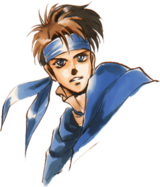 Unsurprisingly, given his sobriquet, Flik wears a blue cape and headband. In Suikoden, he wears these over a breastplate, a mustard shirt, blue pants, and high, brown boots. In Suikoden II, he instead wears a pale blue jacket along with black pants and boots, with blue leg guards. He wears brown gloves.

Physically, Flik was said to be a handsome man, a trait that got him unwanted attention from women at times, including with Kimberly, Rina, and Nina. Kawano Junko drew Flik's final design to her own personal tastes after her first design was rejected for not being bishonen enough. His nickname, Blue Lightning Flik, was decided before his design, influencing his blue costume.

Though Flik grew up in Warriors' Village and followed some of their traditions, such as the naming of his sword, he did not frequently return to the village and was not considered to have completed his trial of manhood. 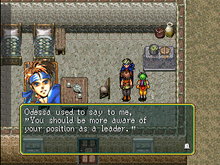 Odessa used to criticize me a lot

Flik was deeply in love with Odessa Silverberg. When Flik learned of Odessa's death, he went into a state of shock. He felt a great deal of guilt that he had not become the leader that he felt Odessa had wanted him to be and decided that he would have to become a better man before he met Odessa in the afterlife. Odessa remained on Flik's mind throughout much of the Toran Liberation War. Despite her death, he considered himself unavailable, and even late into the night prior to the Battle at Floating Fortress Shasarazade, he was still up late into the night thinking of Odessa.

Flik had a somewhat rocky relationship with McDohl; unwilling to accept him into the Toran Liberation Army at first, Flik could not understand why Odessa trusted McDohl on important assignments. After joining forces, Flik began to notice the traits Odessa had seen in McDohl. Flik became quite protective of McDohl, joining him on missions and even taking an arrow for him in Gregminster Palace. 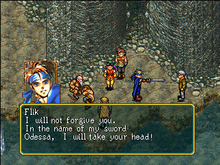 Just another failed promise to Odessa, I guess

During much of the Toran Liberation War, Flik was immature and hotheaded. Sanchez claimed that that immaturity was something that both he and Odessa had loved about Flik, as he was also a very honest person. Due to that immaturity and rashness, Flik made some careless decisions, such as his ordering all troops to advance to Scarleticia Castle following the Toran Liberation Army's victory at the Fortress of Garan without doing any reconnaissance.

Flik would become more mature during the war. He gradually grew more tactical, such as when he advised McDohl that they bring Liukan to the Dragon's Den, in order to make Joshua Levenheit more likely to commit to an alliance. His maturity came to fulmination when despite his rage at Sanchez, he agreed not to execute him at Shasarazade. He had learned to look to the future with his comrades.

Years later, during the Dunan Unification War, the loss of Odessa still cast a shadow over his heart from time to time. Still, he always carried Odessa's memory in his heart. Unwilling to take the easy way out, he always fought to become a man worthy of the woman he loved.

At first, he did not get along with Viktor at all, but over the course of the Gate Rune War, the two had built a trust on the field of battle. It was their fighting together at Gregminster Palace in order to allow McDohl to escape, however, that they became true friends, willing to trust and depend on each other without words.

Flik is a wandering swordsman. Born and raised in Warriors' Village, Flik left the village on his Trial of Manhood and eventually became a mercenary. Around SY 453, after a number of years working as a mercenary, Flik saved Odessa Silverberg from some Scarlet Moon Empire soldiers. Enraptured, he quickly joined her cause and eventually became Vice-Commander of the Toran Liberation Army.

As a swordsman, he gained the title "Blue Lightning Flik" due to his blue clothing and sharp swordsmanship. Over time, he and Odessa would fall in love with one another and become a couple all while Flik continued to serve as a soldier in the fledgling Liberation Army.

When the hideout at Lenankamp was attacked, Flik fled to Kunan. Flik tried to round up the scattered former soldiers of the Toran Liberation Army, but when there was a sudden crackdown on rebel factions within the area, many of these former soldiers were captured. After hearing of a revived Toran Liberation Army at Toran Castle, Flik mustered his remaining troops and headed there. 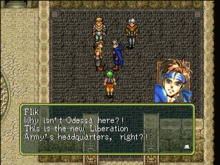 She, uh, she went fishing?

Once he arrived, Flik heard of Odessa's death and was overcome with grief. Flik was unable to accept McDohl as the leader of the Toran Liberation Army but after calming down and realizing how his reaction would have disappointed Odessa, agreed to join forces to help rescue their comrades who had been captured. Flik's hotheadedness remained an issue as he led the Toran Liberation Army to a dismal defeat at Scarleticia Castle.

However, Flik gradually came to mature and accept McDohl as a leader. When McDohl made the unpopular decision to pardon Milich Oppenheimer, Flik supported him and accepted him as the true leader of the Liberation Army. From that moment on, Flik would fight as a productive, invaluable member of the rebel forces. 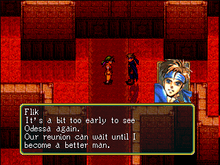 With his vow, Flik became immortal

Following the Toran Liberation Army's success in the last battle, Flik requested that he be part of the party that would infiltrate Gregminster Palace, in order to gain revenge for Odessa's death with his own hands and choose to stay behind in the palace in order to protect McDohl from Scarlet Moon Empire troops eager to avenge Barbarosa Rugner. Confronting hordes of Imperial soldiers, Flik declared he could not die until he could meet Odessa again as a better man.

Following the end of the Toran Liberation War, Flik disappeared. Despite being missing, however, none of the Liberation Army doubted his survival. In the immediate aftermath of the war, he and Flik had hid out in an inn in a nearby village to avoid the remnants of the Imperial Army. 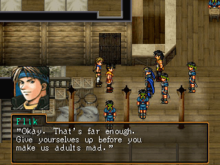 Geez, Flik. You used to be cool.

After the end of the Gate Rune War, Flik and Viktor travelled to the City-State of Jowston. Although their personalities often clashed, they both relied heavily on the other and had a bond forged through battle and their experiences as part of the Toran Liberation Army. In the City-State, they were hired by Anabelle, Mayor of Muse City to form a mercenary company.

He and Viktor found a youth in the river near their Mercenary Fortress after jumping from Tenzan Pass. Taking him back, they kept him captive and took care of him. When the youth and Jowy Atreides escaped, Flik and Viktor would pursue them, rescuing them in Kyaro Town moments before their execution. 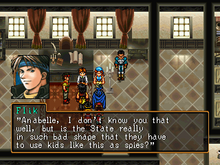 Don't you use OUR child soldiers as spies!

Once the Dunan Unification War broke out, the mercenary army was charged with the defense of Muse City. Flik would accept the help of the youth he had found after testing him in a duel to prove his prowess. Although Flik initially viewed the hero as a youth to be protected, he would grow to realize his talents and the two would become equal partners in the fight against the Highland Kingdom.

As the war would continue and the hero would ascend to lead the New State Army, Flik saw Odessa's ambitions for peace in the hero just as he had previously seen McDohl inherit her ambitions some years before. This is what inspired Flik to continue fighting for the New State Army until the very end. 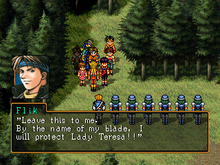 The last woman I swore to protect? Hey, don't worry about it

Flik played a pivotal role in the New State Army's infiltration of Greenhill City. Investigating the city for traces of the missing acting mayor Teresa Wisemail, Flik would save Fitcher from an angry mob and also rescue Nina from an altercation with a Highland soldier. That would win him Nina's heart, a trophy he most certainly did not desire.

As the war continued, Nina would try and have Flik open up about himself and Odessa. Her jealousy caused her to dismiss Odessa as a dead person Flik was obsessed with, much to his furor. Apologizing, the two would make up but Flik also made clear no one could dislodge Odessa from his heart.

Once the Dunan Unification War came to a close, it seemed like Flik could have taken up a key position in the new Dunan Republic. Instead, like he did three years prior, Flik would leave the country he helped create and would continue on a journey with Viktor.