Gadget (からくり丸, Karakurimaru) is a character in Suikoden II and Genso Suikogaiden Vol.2. He is a machine built by Juppo to assist Meg.

Gadget is a clockwork doll Juppo built to accompany Meg on her adventures and entrusted to her as his master. He is a highly advanced creation, a doll only capable of being made by advanced trickster techniques. He was able to speak with people and act according to his own will, as well as learn. When first built, Juppo explained to Meg that he was like a new-born baby, needing concepts such as hand shakes explained. 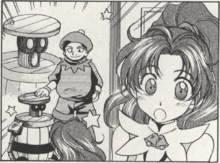 It's always "How's Gadget?" and not "How's the small child trapped inside Gadget?"...

He does not feel pain, but does possess emotions. When Meg knocked on his head affectionately upon first meeting him, Gadget did not feel pain but did fear the "strike", until its meaning was explained. Among Gadget's various abilities were a transformation protocol that was only truly perfected during the Dunan Unification War, as well as a thermal detection ability. He was not waterproof, however.

Gadget's internal mechanisms are not well understood, save for his apparently having a mainspring (or wind-up) power source. Bamboo was used for his joints, due to its flexibility. He was sturdily built and able to support Meg's weight, so she sometimes used him as a mount. 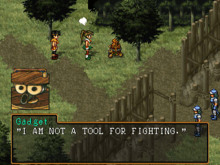 Originally ordered by Juppo to take Meg home to Lenankamp, she would manage to distract him and dismount him. Returning to Rikon with her, Gadget would come to believe he was not merely ordered to bring Meg home by any means necessary but to escort her and keep her safe wherever she went, and so agreed to accompany her on her pursuit of her uncle.

While attempting to cross from Greenhill to Muse, Meg and Gadget came across the hero and decided to join the New State Army when Gadget recognized who the leader was and Meg declared that he held a resemblance to Juppo. Gadget would play an active role in the army as a special forces unit. 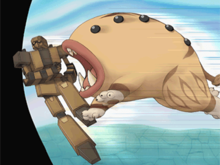 Why was I programmed to feel pain?!

Despite the fact Juppo built Gadget for Meg, Gadget had an aversion to Meg's tinkering and would hide from her. Meg, however, enjoyed tinkering with Gadget, tearing him apart and putting him back together again, although she sometimes wound up with excess screws. Meg enjoyed repairing Gadget and thought up improvements for Gadget such as waterproofing, although Gadget was unenthusiastic about this potential upgrade.

Following the Dunan Unification War, Gadget continued to travel with Meg, despite her selfishness, and struggled in his appointed role as her guardian. He was dragged into a strange adventure alongside Meg, Millie, and Nash during their journey to Crystal Valley, due to Viki's teleport magic.

Years later, in a fit of inspiration, Meg would rebuild Gadget from the ground up, creating the advanced machine known as Gadget Z.