Humphrey Mintz (ハンフリー・ミンツ, Hanfurī Mintsu) is a supporting character in Suikoden and Suikoden II who also appears in Genso Suikogaiden Vol.2. Humphrey is a skilled but taciturn swordsman. 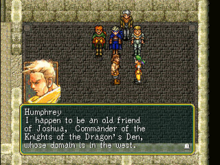 Humphrey is a shameless name-dropper.

Humphrey Mintz was one of the most renowned captains of the Scarlet Moon Empire's Hundred Man Battalion, known as "Broadsword Humphrey" for his wide range with his large swords. When he was ordered to participate in the Kalekka Incident, Humphrey grew furious and attacked his commander, becoming a fugitive. Afterwards, Humphrey disappeared without a trace before meeting Flik and Odessa Silverberg, becoming one of the earliest members of the Toran Liberation Army.

When the hide-out at Lenankamp was attacked by Scarlet Moon Empire soldiers, Humphrey escaped to Kunan with Flik and Sanchez before making his way to Toran Castle with members of the displaced Liberation Army. There, they would merge their forces with the new Liberation Army under the command of McDohl.

Following the Battle at the Northern Checkpoint, Humphrey attacked the Fortress of Rakan as a decoy before returning to Moravia, where his reinforcements took care of the remaining troops stationed outside. Following the end of the Gate Rune War, Humphrey left the Toran Republic with Futch on a journey to find him a new dragon, at the request of his old friend Joshua. 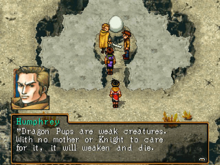 A dragon pup is for life, not just for Winter Festival.

Humphrey and Futch headed towards Harmonia in order to research wild dragons but were slowed down by the Dunan Unification War. Staying in Highway Village, Humphrey encountered the leader of the New State Army.

When Kent, a friend of Futch, disappeared at Mt. Rakutei, Humphrey mounted a rescue party. Journeying with Futch and the hero to the mountains, the party saved Kent and found a dragon's egg which hatched into a baby dragon. Humphrey would be able to break through Futch's hesitation and fear of bonding with a new dragon by acting coldly. Moving to strike down the dragon so it would not grow into a feral, wild adult, Humphrey would encourage Futch's intercession. Their journey's purpose unexpectedly fulfilled, Humphrey and Futch agreed to join the New State Army in order to repay the hero's help. 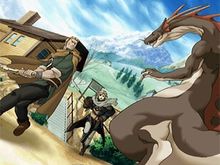 I think he just really wants to kill a dragon, honestly.

After bringing his formidable sword-arm to bear during the Dunan Unification War, Humphrey continued on a journey towards Crystal Valley with Futch in order to research more information about Bright, the mysterious baby dragon they had found.

During the journey, they would stop at Marid Village in Harmonia, encountering a ferocious black dragon. Humphrey would face the dragon alongside Futch and Nash Latkje. Fighting without fear, he would play a vital role in protecting the village and afterwards would continue his journey with Futch.

His whereabouts thereafter are unknown save that Humphrey eventually passed his sword on to Futch as the Dragon Knight was seen wielding it during the War of the Champions.

Despite his silent nature, Humphrey would occasionally open up to others. Before the Battle at Floating Fortress Shasarazade, Humphrey told Mathiu Silverberg how he had attacked his commander during the Kalekka Incident; it had been the first time, and, he hoped, the last time, he had attacked someone out of sheer hatred. Humphrey also enjoyed a long talk with the hero and paid for the young man's room in gratitude.

Humphrey was highly practical, and despite his shock at hearing of the death of Odessa Silverberg, he immediately recognized that McDohl would be able to succeed Odessa as a leader. When Humphrey and Futch discovered Bright, Humphrey was prepared to destroy Bright should Futch fail to accept him, despite the rarity of the creature. Despite his practicality, Humphrey could also be empathetic, and comforted Futch over Black's death.

Befitting his logical nature, Humphrey was also unafraid to ask former adversaries for aid; during the Gate Rune War, Humphrey asked Kreutz to join the Toran Liberation Army, immediately noticing that Kreutz would be of great help to the force.