Genshu (ゲンシュウ, Genshuu) is a character in Suikoden II. Genshu is a wandering swordsman who lent his strength to the New State Army. 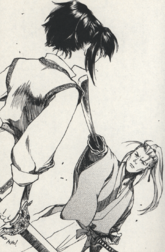 Lesson #1: Don't let the enemy put your sword up to your neck.

Genshu was a swordsman obsessed with swords. Genshu was born into the warrior caste in his homeland, along with his younger brother, Tesshu. Together they trained, with Genshu being judged the less talented of the two.

Diving ahead with reckless abandon in an attempt to bridge the gap, the two become known as The Wise and Foolish Siblings due to Tesshu's natural talent and humility and Genshu's wild hotheaded drive to win at any cost. His inferiority complex made him rude and surly, although he always loved and respected his brother.

Eventually, Genshu would leave his home village, following a path of increasing his strength by fighting in life-and-death duels, leaving a trail of bodies in his wake. Even when his opponents would refuse to duel, Genshu was said to sometimes force the matter.

Vowing to make him see the error of his ways, Tesshu left his village and challenged Genshu while masked. Genshu would win the duel, despite being wounded himself, only for his brother to reveal himself and open Genshu's eyes to the killer he had become.

Distraught, Genshu continued to wander, ending up as a sellsword in Ling Hua Town around the time of the Gate Rune War. He would come to tutor Liu Mei in the way of swordplay, training her to gain revenge on the man who murdered her father.

It was not until Liu Mei refused to kill her foe after defeating him, despite Genshu's urging, that he shook himself out of his despondency and took to heart his brother's plea for peace, leaving Ling Hua Town. 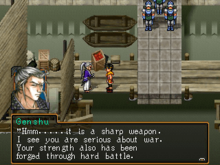 Since that time, Genshu had kept his sword sheathed, though he kept it at his side as he was always a swordsman at heart. He encountered the leader of the New State Army during the Dunan Unification War in Coronet Town. Impressed with his sharpened weapon, Genshu joined the New State Army, feeling they shared similar ideals. Genshu had decided to follow the way of the sword again by serving the hero.

Although now a quite man who focused a lot on his meditations, Genshu still held a passion for swords. He particularly enjoyed being close to the Star Dragon Sword, which he was said to almost worship. In fact, he was enamored by stories about any famous swords, spending much time talking with Shin about the subject.

After the war, Genshu returned to his wandering life, his whereabouts unknown. Although he had taken up the sword once more, it is said that he would never let unnecessary blood be drawn by it again.