Pahn (パーン, Pān) is a supporting character in Suikoden who makes a cameo in Suikoden II. Pahn is a member of the McDohl household who protected McDohl during the Gate Rune War.

Pahn is a skilled martial artist who swore allegiance to Geil Rugner during the War of Succession. Pahn faced General Teo McDohl in a duel during the war and lost; after this, Pahn defected to Teo McDohl's forces. Pahn came to live in the McDohl household and even helped in the upbringing of Teo's young son. Pahn continued to protect and help McDohl during his missions for the Imperial Guard. 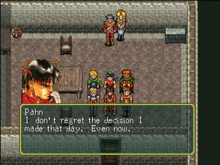 We kind of regret the decision you made that day, if that counts for anything.

During the Gate Rune War, Pahn initally served the Scarlet Moon Empire, but he eventually reunited with McDohl in Kouan. Though commanded by Kraze Miles to capture McDohl, Pahn declined, as he wished to join the Toran Liberation Army. Pahn protected McDohl loyally and was one of the first to arrive after an assassin attacked the young master, afterwards standing guard outside of his door.

Pahn proved his allegiance when Teo McDohl attacked Toran Castle. To buy the Toran Liberation Army time, Pahn dueled Teo. Pahn proved the victor of the duel, forcing Teo to retreat, though Pahn would always wonder whether Teo had taken it easy on him.

After the war, Pahn left on a journey to improve himself. Three years later, however, he returned to Gregminster, since he was out of money, although he claimed it was because he had a feeling that McDohl would be returning to the city.