Tesla (テスラ, Tesura) is a supporting character in Suikoden who makes a cameo appearance in Suikoden II. A scrivener who did not wish to be called for the war effort; Tesla nevertheless found himself working for the Toran Liberation Army. 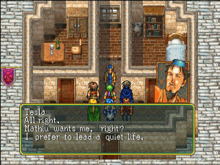 You can be a quiet partisan rebel, it's okay.

Tesla is a talented scrivener who preferred to live a quiet life. An acquaintance of Mathiu Silverberg's, Tesla having worked as a document forger to facilitate the smuggling of goods under Mathiu's watch, Tesla was hand-picked by the Toran Liberation Army strategist for recruitment.

Since Mathiu knew him, Tesla had settled down as a scrivener in Antei under the name of Albert Onyx. Tesla did not wish to join the Toran Liberation Army and tried to avoid them. However, Viktor, one of the members of the group sent to request Tesla's services, saw through Tesla's pseudonym quickly and told him to get ready to travel to Toran Castle.

Though despairing at his fate, seeing he had little choice, Tesla headed to Toran Castle, deigning to travel alone rather than trust Viktor and company to bring him there. Despite being hesitant to join the Liberation Army, Tesla aspired to do his best on the task he had been given.

He and Kimberly created a forged document so perfect that it fooled the guards of Soniere Prison and allowed the Liberation Army to rescue Liukan. Though he remained part of the Liberation Army until the end of the war, Tesla often desired to return home to Antei, often saying that he needed to clean his home.

Following the end of the Gate Rune War, Tesla's talents as a clerk were recognized and he was appointed the Secretary of State of the newly formed Toran Republic by President Lepant.