Kimberly (キンバリー, Kinbarī) is a supporting character in Suikoden. A master counterfeiter, Kimberly joined the Toran Liberation Army in order to put her skills to use. 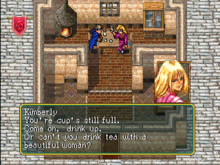 Kimberly is a master counterfeiter living in Antei; her copies were said to be near-perfect forgeries. She earned her money forging cargo slips for smuggling purposes. She was a heavy drinker and a dedicated pursuer of any men who interested her. An acquaintance of Mathiu Silverberg, Mathiu wrote her a letter asking her to join the Toran Liberation Army in order to forge a document for them.

After having Mathiu's letter read to her, as she herself could not read it, Kimberly decided that she would only join the Toran Liberation Army if Flik treated her to dinner. Although Flik protested that he could not, Viktor gave Kimberly permission to do what she would like with Flik.

After an evening with Flik, Kimberly headed to Toran Castle Before leaving, she also told McDohl and his party where they could find Tesla. Kimberly and Tesla made an excellent forgery of the Imperial documents the Liberation Army needed, which Kimberly claimed was a result of her perfectionist nature. 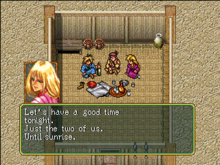 Kimberly continued to work with the Liberation Army closely throughout the rest of the Gate Rune War. She wielded a kitchen knife in battle, one which had been sharpened enough to be as sharp and dangerous as a sword.

While serving with the Liberation Army, she met Tai Ho and his sworn brother, Yam Koo. Kimberly was quick to try to make a move on Tai Ho, but Yam Koo, knowing Tai Ho's weakness for women, tried to prevent her from getting too close to him. Following the war, Kimberly forced her way into Tai Ho's household.

Tai Ho and Kimberly eventually got married, but the marriage was hardly idyllic, as Tai Ho and Yam Koo travelled to Dunan to escape her, with help from their friend Kun To. What Tai Ho didn't know, however, was that by this time, Kimberly wasn't interested in him at all, but instead had her sights set on Yam Koo.