Yuber (ユーバー, Yūbā) is a recurring antagonist who appears in Suikoden, Suikoden II and Suikoden III. Known as the Black Knight, Yuber has appeared in many conflicts throughout history.

A demon who violently hates True Runes and desires nothing but to create utter chaos and destruction in the world. His thirst for suffering is quenched only by killing others and hearing their dying screams. Yuber bears one of the 27 True Runes, the Eight Section Rune, and is a master of both magic and his sword technique. 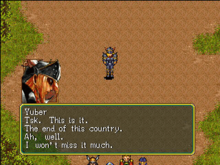 His cruelty, aura of darkness and awesome power mark him as something other than a human and he has been described as a "Soldier of death". Known to appear on bloody battlefields as an eerie black knight, Yuber has been a scourge in many wars over the years.

Yuber has been a subordinate of Windy, complicit in her attack on the Village of the Hidden Rune as well as during the Gate Rune War. Yuber led the Imperial Army during the last battle. Following his loss, however, he was dismissive of the result before disappearing, pursued by Pesmerga, who had been hunting him for some time.

During the Dunan Unification War, Yuber was invited by the genius strategist Leon Silverberg to fight for the Highland Army. He showed more of his great ability under Jowy Atreides. Stationed at Greenhill City, he would encounter the leader of the New State Army there, seemingly taking an interest in his True Rune, regarding it with anger and hatred. He would summon a Bone Dragon to attack his enemies before abandoning the city.

He would participate in several more battles during the war but would abandon the Highland Kingdom during the last battle, seeing little value in fighting for a doomed country. He was once again pursued by Pesmerga, who called him "a devil, a shadow, my arch-nemesis......" although the meaning of this has yet to be revealed and their true connection is unknown.

Prior to the War of the Champions, he was contacted by Luc, through Albert Silverberg, who knew how to reach him. Agreeing to aid Luc's goal in destroying the True Wind Rune, he would cooperate with the Destroyers to carry out their plan. By assassinating Lizard Clan Chief Zepon and razing the Karaya Village, Yuber helped spark war and destruction throughout the Grassland.

Yuber brought his mastery of his sword technique to bear against the Fire Bringer time and again but, finally, at the Ceremonial Site was defeated by Geddoe, causing him to abandon his mission. His whereabouts after that are unknown, but it said that his figure was spotted amongst the deformed monsters that overflowed from the collapsing ruins.