Shu is a military strategist and former student of Mathiu Silverberg. He would split from his mentor over differences in ideology and would become a prosperous trader in the City-State of Jowston before agreeing to become the strategist of the New State Army.

Shu is a handsome man with long, dark hair and brown eyes. He wore a purple-brown scarf over a long black and light blue coat with intricate designs woven in. Underneath that, he wore a light blue tunic, white pants, and black shoes. 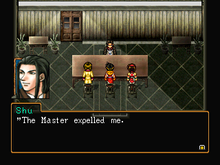 All just because he wrote "Odessa Rulez" on the blackboard

Shu is a brilliant man and a first class strategist. While studying under Mathiu Silverberg, Shu met Apple when the latter was 11 years old. He came to think of her as a little sister, while Apple was taken in by Shu, developing a crush on him.

Though taught by Mathiu Silverberg, Shu followed a different ideology than his teacher, preferring to use his knowledge for profit. Shu and Mathiu were unable to get along and Mathiu eventually expelled Shu. Shu never saw Mathiu again.

As a trader, Shu developed a vast fortune, trading with places as far as the Island Nations and his fame as a trader spread as far as the Toran Republic. His success was said to be because he handled every detail of his trades himself. Shu also had a reputation for politeness and treated his servants well.

As a strategist, Shu had absolute confidence in his abilities, and was sometimes seen as a boor because of his strong belief. However, as he knew human habits and emotions better than most anyone else, it could be said that even this was an affectation designed to enhance his prowess as a strategist. 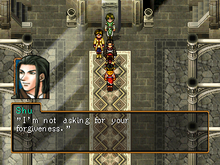 Shu did whatever was necessary to guarantee the success of the New State Army, including sending Pilika with a rescue party during a peace conference ambush in Muse City and asking Kiba Windamier to take on a suicide mission during the attack on the Matilda Knightdom. In many ways, his ideology was similar to Leon Silverberg's, though the two had not met prior to the Dunan Unification War. Shu's thoughts on this gradually changed as the war progressed.

In the end, Shu did not consider people as pawns, which he considered Leon Silverberg's attitude as a strategist. Leon equally disliked Shu's attitude, considering Shu's talent wasted. Shu was even prepared to give his own life for the New State Army, although he was rescued by Viktor.

Shu is an accomplished strategist and trader. He trained under Mathiu Silverberg, but was expelled due to ideological differences. Shu felt that winning at all costs was the prime goal of a strategist, while Mathiu felt this was selfish and there were goals beyond mere military victory to strive for. He eventually settled in Radat Town where he became a wealthy and famous trader.

During the early stages of the Dunan Unification War, Apple approached Shu to ask him to join the New State Army. Though at first hesitant to join the war and hostile to the idea, Shu accepted after being impressed by Apple's dedication and willingness to go to any means to acquire his power. Arriving shortly thereafter at North Window, Shu's commanding presence and swift analysis of the situation quickly dispelled the gloom hanging over the surrounded forces at the castle. 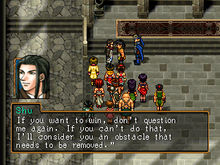 This is what we call 'people skills'

As the chief strategist of the New State Army, Shu came up with many ingenious strategies to help propel the New State Army to victory. He frequently overcame superior numbers through the use of psychological warfare, such as taking advantage of recently conquered South Window soldiers' fears that they would be executed by the Highland Army during a battle against Solon Jhee, faking discord between himself and Ridley in order to have Ridley's unit create an ambush in a subsequent battle, and using a fire attack to trap Leon Silverberg after anticipating Leon's movements in the Battle of L'Renouille.

Following the death of Luca Blight and Jowy Atreides' ascension to King of Highland, a truce was proposed from Highland to the New State Army. Shu recognized that this was a ruse immediately but that the risk would be worth it only if precautions were taken. In the end, he would use Pilika as a tool to stop Jowy from ordering the New State Army's leaders deaths in Muse City. Though Nanami would claim to hate him forever for what he did, Shu was willing to accept any stigma to aid the hero. 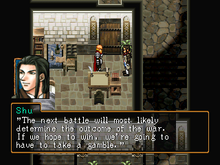 Prior to the New State Army attack on Matilda, Shu would take the drastic step of asking Kiba Windamier to lead a decoy attack on the Mercenary Fortress in eastern Muse Principality. Knowing that this was akin to a sacrifice, Shu tried to lay plain the risks involved. Even though Kiba readily agreed with Shu's strategy and was willing to lay down his life for the cause, the decision still weighed heavily on Shu.

Shu's strategies eventually led the New State Army to the cusp of victory. After Muse City recaptured, the state of affairs was as it was before the war began. However, Shu would advocate continuing the advance and seizing L'Renouille, arguing that it was impossible for the two nations to co-exist sandwiched between the Toran Republic and the Holy Kingdom of Harmonia. 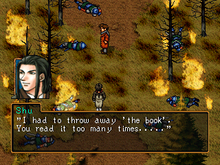 I don't need your book, I've read The Secret!

Leon Silverberg was Shu's biggest obstacle during the Dunan Unification War. They were both able to read each others moves well, making each confrontation especially fraught with danger. In the end, Shu was able to blindside Leon and defeat him by becoming willing to place his own life on the line in his strategies, something Leon would not have dared predicted.

Following the war, Shu dreamed of leading a quiet life but continued to play an important role as Chancellor of the Dunan Republic. He would also tutor Klaus Windamier in military strategy in accordance with Kiba's final wishes.

When Teresa Wisemail assumed the presidency of the Dunan Republic in SY 461, Shu would step down from his role as Chancellor. He entrusted the position to Klaus and retired once more to Radat. Though from time to time, Klaus would visit Shu for advice.

Shu was also said to have roused himself from his retirement to aid the Dunan Republic during the Higheast Rebellion.