Suikoden III (幻想水滸伝III, Gensōsuikoden III) is the third main installment of the Suikoden series and the sixth game released overall. It was designed and released for the Sony PlayStation 2.

It tells the story of the knight Chris Lightfellow, native tribesman Hugo and mercenary Geddoe as their loyalties and worlds are torn asunder by war, first between regional powers and later following an invasion by the Holy Kingdom of Harmonia.

Suikoden III built on the foundations laid by the first two Suikoden titles but did not maintain the same level of fidelity that Suikoden II did with its predecessor. The battle system underwent a great number of changes, with battle teams now organized in three teams of two in which commands were entered for the group as a whole, with the AI providing support. The skill system made its first appearance here, allowing players to level up their characters abilities to counterattack and so on, as well as their elemental affinities.

The war system went under significant revision, with Suikoden II's grid battle being replaced with units being placed on a set of connected vertices. Army units engage in combat by one unit moving into a space occupied by a hostile unit and then the standard Suikoden III battle system is used, albeit an extremely sped-up variety in which battles are played through the AI.

The story was told through what Konami dubbed the "Trinity Sight System" where each perspective is chosen and played through a series of chapter, replaying certain events multiple times from different perspectives. The data transfer option seen in Suikoden II also returns, allowing a small number of characters to return with higher levels and improved weapons and adding references to the previous games provided the player has a late game save from Suikoden II on their memory card.

Suikoden III told the story of three distinct groups, the Zexen Knights, led by Chris Lightfellow, the Karaya Clan, represented by Hugo and the mercenary group led by Geddoe, in the employ of the Holy Kingdom of Harmonia. Tensions run high between Zexen and the tribes of the Grassland, eventually leading to war after a disastrous truce meeting. Eventually, these events are revealed to be orchestrated by Harmonia in preparation for their own invasion.

Events are also tinted by rumors of the reappearance of the Flame Champion, Grassland's hero in a similar conflict 50 years prior to the events of the game. The three main characters each follow their own paths, eventually crossing paths and forging an alliance against the Harmonian onslaught. Even this war is eventually revealed to be the machinations of the mysterious Masked Man, who attempts to rail against destiny by destroying one of the 27 True Runes, an event that would bring unprecedented destruction. The various parties now unite to fight this new threat, but even in victory, the future remains uncertain for the region.

Suikoden III was released for PlayStation 2 on July 11, 2002 in Japan. It had two TV commercials in Japan, each 15 seconds in length. The game would be released in North America on October 22, 2002. Curiously, the game would not receive a PAL localization, ostensibly due to language requirements. The game would be re-released in Japan on June 5, 2004 as part of the KONAMI the Best series and once more on September 2, 2005 as part of the KONAMI Hall of Fame Selection series. 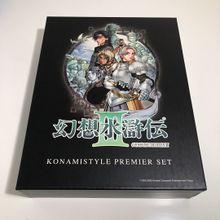 A Konamistyle Premier Set version of the game was also released in Japan for its initial launch in 2002. This limited edition would include a small Flame Champion plush charm, a metallic bookmark, two mousepads featuring artwork by Ishikawa Fumi, the Genso Suikoden III Music Collection ~Itsuka no Michi~ CD, and a copy of the game. This would all come inside a book-themed case which slid into a stylish black sleeve.

In 2015, the game would be re-released on the PlayStation Network for PlayStation 3, with not only Japanese and North American releases, but a first-ever European and Oceanic release for the title as well. Due to limitations in the PS3's formatting of PS2 Classics, it is ordinarily not possible to transfer Suikoden and Suikoden II data, although a solution of sorts is available here.

Suikoden III would earn a 31/40 score from Weekly Famitsu on its release, giving the game a Silver Hall of Fame status as a result and marking it as the highest rated title in the series to that point.

Overseas, coverage of the game would begin in early 2002. The November 2002 issue of Electronic Gaming Monthly would note that past Suikoden titles held high gameplay and story standards for this new game to live up to and, while noting that Suikoden III could not compete in production values with the likes of Final Fantasy X, would hopefully hold its own through warmth and charm.

By late 2002, GamePro was praising both the potential of the title's Trinity Sight System as well as the "welcome departure" from the 2D sprites seen in Suikoden and Suikoden II.

Reviews would begin to hit in December 2002 and began poorly, with Official U.S. PlayStation Magazine branding the game "a disappointment" and scoring it at 3 out of 5, calling the story "a bag of bricks [the player would] have to heave along" and "simply not as good as the past titles".

Most reviews were more positive. The game would receive a single 7.0 from Electronic Gaming Monthly and GamePro was especially effusive, praising the game's graphics, story, gameplay, and dialogue. The game would score 4.5 out of 5 from the magazine. Some reviewers debated the merits of the jump to 3D and the proportions of the character models.

Suikoden III garnered mainly positive reviews, yet the changes in gameplay and the Trinity Sight System divided fans. Suikoden III remains the highest selling Suikoden game to date with 377,729 sold copies by the end of 2002 in Japan [1] and about 190,000 sold copies in total in North America [2] and was the final game for original series producer Murayama Yoshitaka. Fan interest began to cool in the years following the release of the title although it still a point of contention whether that is the fault of Suikoden III or the lackluster reception to Suikoden IV.

In later years, the game would come to be seen by video game publications as a misstep, too removed from the popular PS1 duology. Its reputation would then rebound once more following the release of Suikoden IV.