Glen Cott (グレン・コット, Guren Kotto) is a supporting character in Suikoden IV. Commander Glen was the leader of the Knights of Gaien just prior to the outbreak of the Island Liberation War. 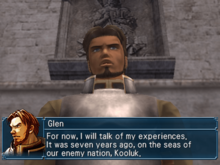 Glen Cott served as the Commander of the Knights of Gaien immediately prior to the Island Liberation War and was a veteran of the Dukedom of Gaien's battles against the Kooluk Empire.

He was the instructor of both Snowe Vingerhut and his friend, whom he cared for due to his status as an orphan. He was the father of Katarina but very few people knew of this. He himself remained unaware of their connection all his life.

Although he could be warm, Glen was also a harsh and demanding leader working to make the best out of his young charges. He was spurred to do so by his own experiences in battle against Kooluk, especially the Gaien attack on El-Eal Fortress that saw four Gaien ships decimated by Troy alone.

Glen was critical of Snowe's abilities, attempting to instill improvement through harsh words while also being pressured by Vincent Vingerhut, Lord of Razril, to promote his son beyond his abilities. He found Snowe to be lacking in awareness and reliability as a ship captain, easily boarding his training vessel during their final training exercise. He would also work to try and ensure the hero's independence post-graduation. He would even go so far as to contact Schtolteheim Reinbach II in Middleport regarding the matter, but the lord was resistant to the matter.

Despite some misgivings, Glen would be pressured to appoint the newly-graduated Snowe as a ship captain quickly. He chose to have Snowe lead the mission to escort Ramada's vessel to Iluya Island, reasoning that it was unlikely to be a perilous task. He would have the hero accompany Snowe, confident that his talents would make up for Snowe's shortcomings. 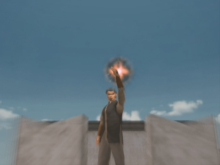 Glen won't leave a single battle pass without the attention being on him.

When Snowe's ship was attacked by the pirate Brandeau, Glen would quickly arrive on the scene after receiving reports of the pirate's movements. Finding Snowe had abandoned the ship, Glen would punch him to the ground out of anger, leaving him to follow up on his other charges. Arriving just after Brandeau's defeat, Glen would end up inheriting the Rune of Punishment. He would struggle with the rune for a time, being confined to bed in Razril.

While convalescing, he was cared for by Katarina while trying to maintain his leadership over the knights. He would be frustrated by both Katarina's doting as well as Snowe's attempts to make up for his previous missteps.

He would manage to use the rune to repel a pirate crew that attacked Razril. He would then lose his life to the rune's curse, with the rune passing on to Snowe's friend, who had arrived just in time to witness his death.

Glen is fought as an event enemy in Suikoden IV twice, in two different forms. The only time he is fought 'normally' is in the first battle of the game as '???'. This battle is unwinnable. He will then be fought in a duel following that encounter.

Much later in the game, a shadow of him within the Rune of Punishment will be fought as Glen's Shadow.