Sonya Shulen (ソニア・シューレン, Sonia Shūren) is a character in Suikoden. Sonya is an admiral in the Scarlet Moon Empire and the Toran Republic. 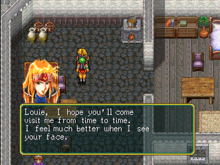 Hey, we have a great relationship!

Sonya Shulen held a position as one of the Five Great Generals of the Scarlet Moon Empire. She is the daughter of Kilauea Shulen, who had fought in the War of Succession.

Sonya inherited her mother's position as a Great General and commander of the navy after her untimely death. She is said to have developed something of a complex from having to live up to the name and reputation of her highly esteemed mother. She was considered a brave and beautiful woman with shining golden hair and blue eyes.

When Sonya ascended to the position of Great General, it was Teo McDohl who was there to help her during her initial struggles adapting to such a lofty position. Their feelings of mutual respect eventually turned to romance. Teo was originally hesitant but eventually followed his heart.

In the past, she had a fierce rivalry with Anji, based on her position as a naval commander and his work as a pirate. Both had led battles and raids against one another on several occasions.

Anji went so far as to pin a wedding dress to the Floating Fortress of Shasarazade, a jab at Sonya's unwed status, saying that "This woman can still wear white!", that was said to have rendered her apoplectic with rage. In return, she arranged for the bandits to capture a supply of high-quality liquor only to lead a raid when the bandits were all drunk, dealing a large blow to their operations. 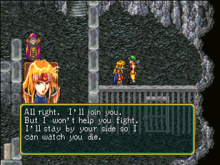 See! She still wants to look at us!

Sonya continued to be involved romantically with Teo during the Gate Rune War and the war would lead her to fight against his son, the leader of the Toran Liberation Army. Her grudge intensified when she heard that Teo had been killed by his son in combat.

She protected the Floating Fortress of Shasarazade and continued to fight on even after the battle was lost and the fortress engulfed in flames, both as a proud warrior of the Empire and to avenge the loss of the man she loved.

Defeated in combat, she attempted to kill herself only to be stopped and taken back to Toran Castle. Even after her capture, she refused to cooperate with the Liberation Army for a time until she gradually came to accept Teo's death and the reasoning behind it.

After talking with Cleo and the hero, she would agree to aid the Liberation Army, stating that she wished to see him die herself. Following the war, she became the admiral of the Toran Republic navy.

Sonya Shulen is fought as a boss enemy in Suikoden. She is fought at the Floating Fortress of Shasarazade and is a difficult boss, not least because she must be fought without resting after battling the previous Shell Venus boss, forcing the party to rely on recovery items and their remaining MP. She is strong in both magic and physical attacks.