The leader of the Blue Knights of Matilda. Direct and passionate, Miklotov inspires great trust from his subordinates due to his knightly pride. Serving under Gorudo, a man who only puts his own self-serving interests first, quickly forces Miklotov to choose between Gorudo and the New State Army's goals.

Miklotov was considered a handsome, if stern, looking man. He had dark eyes, strong eyebrows, and black hair, styled in a short, cropped bowl cut, further emphasizing his seriousness.

As a knight of Matilda, he wore a large blue long coat over a blue tunic, secured with multiple latches and a belt. Beneath this, he wore white pants and knee-high black boots, trimmed with blue. He also wore white gloves. On the left side of his chest, he wore the emblem of the Matilda Knights. During the Dunan Unification War, he removed this for a time due to abandoning his post to join the New State Army. 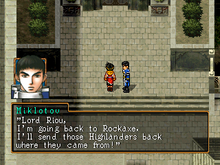 Miklotov was passionate and prone to speaking his mind. In addition to his old-fashioned, serious demeanor, his plainspoken ways did not endear him to women. However, it gave him great empathy towards others. Miklotov was was extremely upset by Gorudo's decision not to aid Muse City refugees when they attempted to cross the border, and even pleaded Gorudo to allow him to invade Muse, if only with his own Blue Knights. At times, Miklotov found his emotions uncontrollable.

His beliefs could be summarized as "help the weak and deter the strong". He held great respect for knightly virtue and tried to adhere to those standards at all times. Miklotov's passionate, if somewhat reckless, attitude was an inspiration to some of the members of the Blue Knights. Highly dedicated, Miklotov trained for two hours before breakfast every morning, which was said to be the secret of his Blue Knights' prowess in battle. Miklotov, like Camus, had a reputation for kindness in Rockaxe Castle.

He has a 3-1 record against Camus in training duels, though the two have never fought to their fullest extent and Camus was known to be quick to concede. 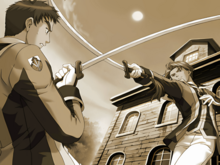 The Sepia Knights of Matilda

Miklotov is a knight in the Matilda Knightdom, who served as the captain of the knightdom's Blue Knights. He was close friends with Red Knight captain Camus, the two having joined the knights on the same day, being comrades ever since. In training, the two set a record for the longest mock battle without a decisive result between them.

Miklotov and Camus became captains of their respective companies at a relatively early age due to a combination of factors. The Matilda Knights meritocracy was a great benefit to them both, as was there being positioned at a key generational change within the order caused in part by Gorudo causing the downfall of more senior leading knights that could rival him.

Prior to the outbreak of the Dunan Unification War, Miklotov accompanied Gorudo to the Hilltop Conference at Jowston Hill. He would hurry Camus along after he bumped into Nanami, possibly thinking that Camus was about to engage in his habitual flirting. 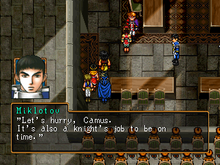 Miklotov aided Muse City in their initial defense against the Highland Kingdom when Anabelle called for members of the City-State of Jowston to fulfil their oath, but was ordered to withdraw by Gorudo in the middle of battle, much to his distaste.

An attempt by Muse refugees to flee to Matilda was met with an order by Gorudo to mobilize. Thinking this meant action on Gorudo's part, Miklotov was initially buoyed only to be despondent when Gorudo order the knights to protect the border from any incursion, refugee or otherwise, ensuring their slaughter. 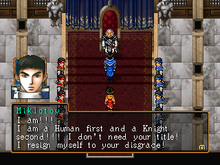 After witnessing the sacrifice of the Muse citizens, Miklotov returned to Rockaxe Castle and asked Gorudo for permission to invade Muse. Gorudo denied his request and accused him of defying his oath of allegiance. Breaking such an oath was the greatest shame a Matilda Knight could suffer but, still, in protest Miklotov resigned his post as Captain of the Blue Knights. In the end, he valued the path of true chivalry and compassion over oaths and personal pride. He and Camus would then join the New State Army, along with many other sympathetic knights.

Miklotov was involved in several of the battles of the Dunan Unification War. Following the end of the war, he reformed the Matilda Knightdom, but declined to become the commander. 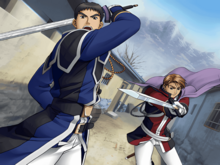 Later, he would travel to the Grassland with Camus, stopping at Milit Village during the journey, hearing rumors of bandit attacks. There, he helped repel the bandits who called themselves the Fire Bringer, alongside Camus, Nash and number of former New State Army members. When Camus was wounded in the fray, Miklotov would help take care of his recuperating friend, reminiscing about all they had gone through together.

During his time in Milit, he was despondent upon hearing that soldiers of the New State Army may have looted the village during the war, but resolved to keep fighting for a future he believed in. Once the bandits were defeated, he and Camus would continue their journey.