Luserina was the youngest child of Salum Barows, and, unlike her father and brother, Euram, she was considered competent as well as a genuinely good person. When she was a child, she was the one who ensured that Chuck was taken into the Barows household rather than turned away. She had met the Prince before, when they were both younger, with Salum Barows trying to push forward the idea of a marriage between the two. Years later, during the Sun Rune War, he would try the same tactic with a similar lack of success.

Luserina was wary of her father and brother and extremely unsettled by their methods and scheming. Thus, when the Prince and his companions arrived in Rainwall, Luserina did what she could to help keep the Prince informed of her father's plans. Although she did appear to be attracted to the Prince and did care for his well-being, she knew she wouldn't be able to marry him as it would have been merely another piece of Salum's plans. 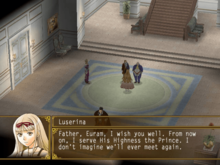 Following the revelations regarding the Barows family involvement in the Lordlake Uprising, a disgusted Luserina abandoned her family and stated that she would never return. Along with Chuck, she joined the Prince's Imperial City Recapture Army as they moved, first to Raftfleet, and later to Ceras Lake.

Luserina sometimes worried that people would judge her based on the actions of her family, something that other Recapture Army members had to assure her was not so.

She also often felt guilty about the actions of her family, especially Euram's continued attempts to extract revenge on the Prince. As such, she made sure to be nice to Roy, Faylen and Faylon for being used by Euram in Sable. She also noted that she had a great-grandmother who was from the Aethelbald family, making her distantly related to Egbert Aethelbald. Following the recruitment of the thief, Raven, he offered to sneak into Rainwall and retrieve the Barows family tree for Luserina, an offer she refused. Although Luserina was angered by her brother's actions over the course of the war, she was relieved to hear that he had survived Sialeeds' attack on the family.

After the conclusion of the Sun Rune War, she donated the Barows estate to the national restoration effort before continuing to help as a new administrator in the area.