Freed is a soldier hailing from South Window Principality who held strong loyalties to both South Window and the City-State of Jowston.

Freed Yamamoto is a South Window soldier with strong loyalties to his home principality. Freed served as an assistant to the mayor of South Window City, Granmeyer, who he held in high esteem. Freed was introduced to his wife, Yoshino, through Granmeyer. 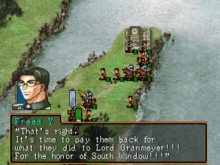 When South Window and Tinto forces occupied the Senan region of the then Scarlet Moon Empire, Freed participated in the attack. He would hold a bias against the Empire, which transferred itself to the Toran Republic following the Gate Rune War.

During the Dunan Unification War, Freed Y accompanied the hero and Viktor on a mission at North Window to investigate the disappearance of young women in the area. As Freed attempted to return to South Window to report on their findings, he discovered that South Window had been taken by the Highland Kingdom.

When Freed became a member of the New State Army, his ties to South Window proved useful as Shu ordered him to infiltrate the South Window soldiers, recently conscripted by Highland, in order to to spread rumours of their imminent execution and pro-New State Army propaganda. Freed succeeded in his mission, turning the former State forces to the New State side and increasing the then-small army's recruits. 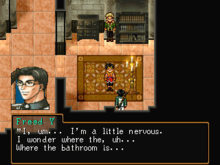 Anywhere can be a bathroom for the low cost of your dignity!

When the New State Army decided to ask the Toran Republic for military aid during the war, Freed was an outspoken critic of the decision. However, Freed also agreed to lead the New State party to the Toran Republic and even personally pleaded the case for an alliance to President Lepant, being convinced to prioritize the safety of his homeland over his own biases.

After the Dunan Unification War, Freed was offered a position in the Dunan Republic, to become the mayor of South Window City, but refused, choosing instead to live happily in Radat Town, as he had promised his wife. Two years, they would have a daughter, Sanae who would go on to fight in the War of the Champions. 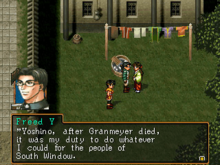 Wife Guy and Work Guy, Freed's got it all!

Freed was said to be exceptionally polite, serious, and also had a strong sense of duty and loyalty. He was a devoted disciple of Granmeyer. He saw Granmeyer as a gentle, wise man who would have been an ideal ruler in a peaceful world. Upon hearing of Granmeyer's death, Freed vowed to fight for the New State Army in order to avenge Granmeyer's death.

Freed was exceptionally close to his wife, Yoshino. Their home was considered by Richmond to be a love nest and Freed was said to be extremely happy when he was around Yoshino. He was extremely protective of her safety, but raised no objections to her joining the New State Army, instead vowing to protect her if need be.

Freed wears glasses due to bad eyesight. This is a trait shared by both his wife and daughter.