Tai Ho (タイ・ホー, Tai Hō) is a supporting character in Suikoden and Suikoden II. Tai Ho is a fisherman with a penchant for Chinchirorin.

Tai Ho is a fisherman and mariner who lives in the fishing village of Kaku. He was fond of the idle lifestyle and had become the sworn brother of Yam Koo after the two had teamed up during a gambling brawl. He held no interest in the ideological differences between the Scarlet Moon Empire and the Toran Liberation Army but did have a weakness for getting involved in risky activities and trusting in luck to see him through the day. 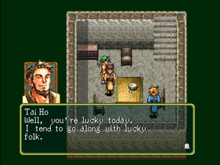 During the Gate Rune War, Tai Ho was sought out after it was said that he was the only fisherman brave enough to take a boat to Toran Castle. After being led to Tai Ho by Camille, the hero and his party requested travel to Toran Castle.

Tai Ho responded that the group were nuts to even suggest such a thing, but, if they were willing to bet all his money in a game of Chinchirorin, Tai Ho would risk his life to go with them. Tai Ho was an expert at the game, playing Chinchirorin so often that Gaspar considered Tai Ho his favorite client. After the hero managed to win, Tai Ho agreed to go. After arriving at Toran Castle, Tai Ho joined the party, eagerly planning on fighting any monsters that the group happened to encounter.

When the group defeated the Zombie Dragon and acquired Toran Castle, it was Tai Ho who suggested naming it Dragon Castle. Tai Ho decided to stick with the Toran Liberation Army, according to Tai Ho, simply for fun. He also felt a bond with the hero due to his good fortune but continued to hold no great belief in the Liberation Army as a whole. 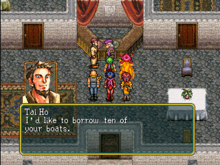 We need them for non-weapon smuggling related reasons.

Tai Ho's talents as a sailor were needed by the Toran Liberation Army when the hero travelled to the Secret Factory in order to gain the Fire Spear. Admiring the boat recently upgraded by Kamandol and Gen, Tai Ho brought the hero to Kirov and travelled with him onwards to the Secret Factory. After finding out from Mose that they would need boats to transport the Fire Spear, Tai Ho called upon his friend Kun To, who he had worked with in the past. Calling in a favor owned to him by Kun To, Tai Ho was able to arrange for transport for the Fire Spear.

As a trained fisherman, Tai Ho was skilled in the use of the trident, making him a capable fighter in battle in contrast to his laid-back personality. During the war, Tai Ho met Kimberly, a stamp maker from Antei, who tried to make a move on Tai Ho, but was partially prevented in doing so by Yam Koo. Knowing Tai Ho's weakness for women, Yam Koo tried not to leave the pair alone.

Following the end of the Gate Rune War, Tai Ho returned to Kaku, where he continued to enjoy a carefree life, although Kimberly had maneuverd her way into Tai Ho's household.

By the Dunan Unification War, in a desperate attempt to escape Kimberly's clutches, Tai Ho arranged to have himself and Yam Koo hired by Kun To and travelled to Kuskus Town in the City-State of Jowston.

Although he refused to help Sheena travel across Lake Dunan when the Highland Army had occupied Coronet Town, he would agree to bring the hero and his comrades across the lake to Kuskus after the hero won a game of Chinchirorin, continuing his habit of agreeing to aid those he considered lucky.

Later during the Dunan Unification War, he would agree to join the New State Army after losing another game of Chichinronin to the hero, much to Yam Koo's consternation. Although, considering that Tai Ho would end up having two consecutive wins from joining allies based on his dice games, it would appear that Tai Ho's logic might be something you can depend on.