Kasim Hazil (カシム・ハジル, Kashimu Hajiru) is a supporting character in Suikoden. Kasim Hazil is a Great General of the Scarlet Moon Empire at the time of the Gate Rune War.

Kasim Hazil is one of the Great Generals of the Scarlet Moon Empire and the Toran Republic. He is said to be the greatest swordsman of the group. During the War of Succession, Kasim rose to the rank of general, fighting for Barbarosa Rugner, with Mathiu Silverberg serving as his army strategist.

Normally a good-natured man, as a commander he was full of confidence and dignity. He would also become a very close friend of fellow general Teo McDohl and was considered the second most experienced of the Great Generals behind Teo.

He is known as "Kasim of the Blue Moon" due to his Blue Moonlight sword. This curved blade scimitar was forged by Senan nomads using a long-lost technique of the Sindar. This tribe has since disappeared and the secrets of Kasim's sword have been lost to time. Originally from the northern wastes himself, Kasim was entrusted with overseeing the Senan region from Moravia as he was used to desert warfare. 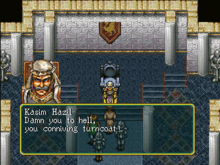 I know you are but what am I?

During the early stages of the Gate Rune War, Kasim Hazil attempted to recall Mathiu Silverberg into the service of the Scarlet Moon Empire, but this attempt failed. Following the death of his good friend Teo McDohl, Kasim Hazil was assigned to guard the northern defenses and decided to build up his forces. Kasim also began to apply extreme pressure on the rebel factions within Senan.

A man of strong patriotism and loyalty, it was thought that Kasim Hazil would be impossible to convince to join the Toran Liberation Army. When the Liberation Army infiltrated Moravia and Mathiu manipulated the Jowston army into invading, Kasim was infuriated as a man who had spent his life protecting the north from Jowston. However, he was ultimately convinced by Milich Oppenheimer, fighting for the Liberation Army for the remainder of the war. By doing so, Kasim hoped to confront the Emperor and convince him to change his ways.

Kasim served the Toran Liberation Army for the rest of the war. During the final battle, when Windy berated Barbarosa, Kasim would immediately leap to his defense, unwilling to forgive the woman who changed the man that he served faithfully, even as a member of the Liberation Army.