Lymsleia was the heir to the throne of Falena by virtue of being the only daughter of her parents, Ferid and Queen Arshtat Falenas. She is generally innocent and cheerful but due to her top-class education received since she was an infant, she speaks and holds herself in a very refined matter, often at odds with her more childish actions. 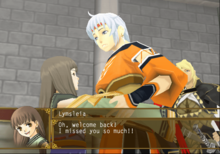 Maybe I liked her more when she saw me as a cursed child only useful for sacrifice to the gods.

When she was younger, she held disdain towards her older brother, the Prince of Falena, due to his ineligibility for the throne. However, as she grew, Lymsleia realized the love that he held for her and overall became a much kinder person. Since infancy, she was protected by the Queen's Knight, Miakis and the two eventually became closer than sisters.

Even though she was still only a child, the Sacred Games held in her honor at the behest of the Barows Faction in SY 449. Ultimately, the Godwin Faction, however, would triumph with Gizel Godwin expected to marry the Princess. Several weeks later, at the official engagement party in Sol-Falena, the Godwin's enacted their planned coup of the Sun Palace, resulting in the deaths of Arshtat and Ferid and the fleeing of the Prince, Sialeeds, Lyon and Georg Prime from the region. With the help of Miakis, Lymsleia too almost escaped only to be stopped by Queen's Knights Alenia and Zahhak, who had sided with the Godwins.

Held in the Sun Palace, Lymsleia had little practical power, even following her coronation as Queen of Falena. Still, during the Sun Rune War, despite her imprisonment, she showed glimpses of maturity and suitability as the Queen of Falena. Following her brother's capture of Doraat, however, Lymsleia came up with a plan to end the war. By demanding to lead the Falenan Army into battle as its Queen, Lymsleia planned for the Prince to break through and rescue her, ending the war. The plan almost succeeded with the Prince breaking through the Godwin Army's ranks and with Zahhak and Alenia occupied in battles of their own. However, at the moment of their reunion, Sialeeds betrayed the Prince, taking Lymsleia with her from the field of battle and back to Sol-Falena.

Back in Sol-Falena, Lymsleia could do little but resent Sialeeds for what she had done, remaining mostly confined to her chambers for much of the remainder of the war. Eventually, Sol-Falena was captured, and the war was essentially over, save for the fleeing of Marscal Godwin to the Ashtwal Mountains, complete with the Sun Rune. Although angry that the Sun Rune had caused so much harm to Falena, Lymsleia also recognized that only the Queendom could keep it safe and so asked her brother to recapture it.

Following his success in doing so, the war was finally over, and peace was restored to Falena. Lymsleia declared the results of the Sacred Games, her marriage and her coronation as Queen invalid before embarking on a series of reforms prior to her official coronation as Queen, including the abandoning of the Senate and the emergence of a representative Parliament. She also removed the old tradition regarding the Commander of the Queen's Knights. Instead of her husband, seeing as she had no wish to have one at this time, she appointed her brother, the Prince, as the new Commander.