Luca Blight (ルカ・ブライト, Ruka Buraito) is the major antagonist of Suikoden II and Genso Suikoden Card Stories who also appears in Genso Suikogaiden Vol.1. The Prince, and later King, of Highland, Luca Blight orchestrates the Dunan Unification War out of hatred for the world.

Luca is a tall, powerfully built man, with dark black hair and small, dark eyes. He has strong black eyebrows.

He is always seen in his royal armor, which was white, the color of Highland, with gold trim, with a royal blue cape. His armor consisted of a breastplate, pauldrons, bracers, greaves, and boots. Underneath he wore all black underclothes. He carried a longsword in a scabbard attached to the waist on his left side, marking him as right-handed.

Luca's cold, violent, and brutal character earned him the nickname the "Mad Prince", and he was feared by all, ally and enemy alike. His only joy came from destruction and death, and his greatest joy was reserved for unleashing the power of the Beast Rune. 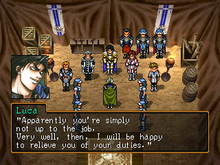 I'm sure Solon Jhee was relieved his execution was nothing personal

That said, he was also considered a general of the highest caliber and not capriciously cruel to his soldiers. He never killed a subordinate just because he didn't like them. However, he was an extreme meritocrat and had no mercy for those he viewed as "incompetent".

Luca was considered an incredibly skilled swordsman as well as a supremely strong and brave fighter. However, he never opened his heart to anyone and always fought alone. He despised his father, Agares, above anyone else but in truth held contempt in his heart for everyone. Even his sister, Jillia, was only spared due to her resemblance to his mother.

Due to his outrageous brutality and cunning, compared to that of a demon, both his enemies and his own soldiers feared and respected him, calling him the "Mad Prince". His strength as a leader and a warrior made him overwhelmingly popular amongst the men of the Highland Army. 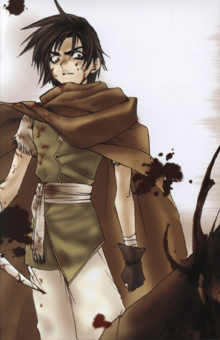 Who would have taught this little guy would end up having emotional issues?

He harbored a hatred not just for the City-State of Jowston but for the entire world. This hatred stems from his childhood. For the most part, Luca's childhood was ordinary though he was always a temperamental youth. In 443, at the age of ten, the Blight royal caravan was attacked by what was ostensibly a group of bandits, although the equipment and training of the brigands indicated they were trained by Muse.

His father would flee the scene and Luca and his mother would be kidnapped. Sara would be violated by the mob in front of his eyes. Eventually rescued, it was this incident above all others that sparked his hatred of his father, of the City-State, and of the world. He would avenge his mother by slaughtering the brigands involved but returning to her and seeing her catatonic broke the heart of the young child.

In the immediate aftermath, Luca would sometimes show his hatred for Agares. However, as he grew older, he began to conceal it. Growing up, Luca received his instruction in sword fighting from Han Cunningham. As he grew older, Luca would take control of the Highland Army from his father, as he was a much more popular officer and great leader, though not necessarily a more talented tactician. 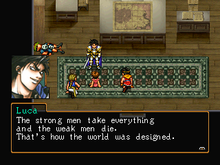 Dissatisfied with the truce his father had signed with Jowston, Luca Bright would orchestrate the slaughter of the Unicorn Brigade and pinned the blame on the City-State in order to justify the invasion of Jowston and the start of the Dunan Unification War, a conflict designed purely to feed Luca's lust for power. His sister, Jillia, would attempt to dissuade him but Luca furiously reminded her that he would kill her if not for her resemblance to his mother.

As commander-in-chief of the Highland Army, Luca actively led the Highland forces since the beginning of the war. He fought on the front lines himself at the head of his veteran White Wolf Army, delighting in the slaughter of both his enemies and ordinary civilians alike. He would massacre civilians in Toto and Ryube Village, mocking their weakness and desire to live. At the Mercenary Fortress, he killed Pohl and would have murdered Pilika if not for the interference of Viktor and Flik. However, Luca was not satisfied merely with sacking villages and town throughout the country. 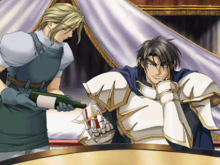 After capturing Jowy Atreides, who had infiltrated the camp to ascertain Highland supplies on behalf on Muse City, Luca convinced Jowy to assassinate Mayor Anabelle and throw open the gates of the town, leading to its quick annexation. After the capture of Muse City, Luca would begin a series of sacrifices to the Beast Rune, hoping to unseal its power and unleash untold death and destruction on the land.

As the war continue to rage and the Highland forces began to meet greater resistance against the New State Army, Luca would conspire with Jowy Atreides to poison King Agares. Ingesting Jowy's poisoned blood through a tradition Knight's Oath ceremony, Agares would quickly pass away on the floor of L'Renouille Palace. Finally, Luca Blight would be King of Highland, delighting in killing the man he hated most in the process.

However, aware of his escalating madness, Jowy Atreides, through his strategist Leon Silverberg, would conspire with the New State Army to have him ambushed during a night raid on the New State Army Headquarters. Surviving the ambush and fighting off waves of New State Army officers, Luca would flee, wounded but defiant, as his men sacrificed themselves to allow him to escape. 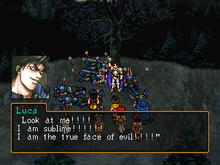 You can break up with me, but you can never undie my pig!

Coming across a wooden amulet, he would open it, releasing a smattering of fireflies. Seeing himself and the world in the ephemerality of the fireflies, he permitted himself but a moment's fear and retrospection before dismissing his feelings. The fireflies would be a signal for the New State Army. When spotted, a barrage of arrows rained down on Luca, wounding him further. Luca would finally be cornered by its leader in a vicious, final duel.

Even in death, Luca Blight would celebrate his own evilness, unable to show remorse and laughing as he was consumed by death. Finally defeated, Luca Blight's death closed the curtain on a life fraught with evil.

Luca Blight is fought as a boss enemy in Suikoden II. He is fought in one uninterrupted event by three different battle parties. He holds a resistance to all damage types and has several potent fire-based attacks.