Anabelle (アナベル, Anaberu) is a supporting character in Suikoden II and Genso Suikoden Card Stories. Anabelle is the popular mayor of Muse City at the beginning of the Dunan Unification War. 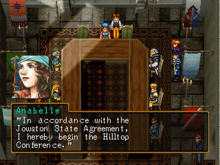 Really should have called it the Hilltop Confrontation.

Anabelle was the mayor of Muse City at the onset of the Dunan Unification War. Her father, Darell, had been mayor before her and she inherited a major role as one of the leaders of the City-State of Jowston. As a mayor, Anabelle was extremely talented, attempting to promote unity within Jowston despite it so often colliding internally over politics.

She was said to have been as tall as most men. Her reddish-brown curly ran below her shoulders, even in her youth, and she often wore a blue shirt and white trousers and vest, with very little accompaniment, save for her blue bandana.

Anabelle was an old friend of Viktor, Anabelle having met him in Muse City during his early mercenary days. In SY 449, after the destruction of North Window by the vampire Neclord, Anabelle would join the South Window City investigation team alongside Viktor as both a friend and a representative of the City-State of Jowston.

The mission was Anabelle's first away from her father, and the particularly gruesome nature of it, as well as her personal attachment to Viktor, weighed heavily on her. Six months later, she would recruit Viktor for a second mission. Someone was using the incident at North Window to inflame tensions between South Window and Two River City, risking war.

Investigating alongside Viktor and Zamji, they would uncover the plot and defeat the conspirators. Anabelle fought with a slender sword, but had little combat experience, putting her in the most danger of the three but the timely arrival of Hauser helped save her. Later, she would wish Viktor well on his journey to defeat Neclord, while she dedicated herself to strengthening the Jowston Alliance.

Her track record was largely down to her political skill as well as her personal magnetism. Of course, the roles of people such as Hauser, Jess and Fitcher in supporting and aiding her were not inconsiderable either. Similar to McDohl and the son of Genkaku, Anabelle was a skilled leader able to gather talented personnel. She could truly be considered a great leader. 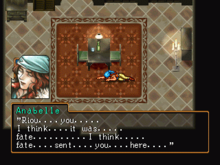 No-one thanks fate for Jowy, clearly.

However, despite her talents, Anabelle was only one person and could only accomplish so much in the fractured City-State. Due to her commitment to protect the peace of the people of Jowston, she also had little time for personal relationships. However, as an old friend of Viktor, the two often drank together, although the social gap between the two was said to be too great to entertain anything more than their camaraderie.

When the Highland Kingdom began their attack on Jowston, Anabelle struggled to pull the disunited powers together. Before anything more could be accomplished, she was betrayed and murdered in her room at night by Jowy Atreides. Although Anabelle was one person, her death was a great blow to the crumbling City-State.

Do your best beam!

Anabelle plays much the same role in Genso Suikoden Card Stories as she does in Suikoden II. She's the mayor of Muse City and old friend of Viktor, attempting to rally the City-State of Jowston in the war against the Highland Kingdom. She is killed by Jowy Atreides when he sneaks into Muse, before opening the gates for the Highland advance. Her interactions with Viktor and the Hilltop Conference are not in the game.

Before her death, Anabelle is an event encounter in the Nearby Forest surrounding the Forest Village. If talked to, she will gift the player between 1000 and 9999 potch or, rarely, her card 004 Anabelle. This is the only way to obtain her card.