Ted (テッド, Teddo) is a supporting character in Suikoden and Suikoden IV and also makes a cameo in Genso Suikogaiden Vol.2.

Ted is the bearer of the Rune of Life and Death, who wandered the world for many years before bequeathing the Soul Eater to his best friend. 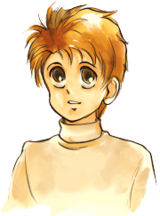 Ted has reddish-brown hair and eyes. In Suikoden, Ted wears a blue tabard over a mustard tunic and brown pants. He also wears black boots. In Suikoden IV he wears a heavier blue coat over similar pants and boots. He is always seen wearing brown gloves. The Rune of Life and Death is emblazoned on his right hand and his gloves are worn to cover this.

His clothes were designed by Kawano Junko to be blue in order to contrast with the hero's red-themed outfit. He carries a bow as his weapon as he finds it easy to use as well as advantageous to be able to attack from a distance or from cover as a fugitive.

Ted was certainly considered a strong-willed youth, able to shoulder the burden of carrying the Rune of Life and Death for so many years. Still, this burden also gave him a crushing sense of loneliness and duty which, at least for a time, rendered him sullen and standoffish with others. In his heart, however, he was a loyal and kind-hearted fellow.

In later years, he was able to form a bond with others at the McDohl household, able to immerse himself in a relatively normal life. He was heavily devoted to his friends, especially the hero. He used the Soul Eater at Mt. Seifu to protect him and the others, despite being all too aware of the dangers involved. At Seek Valley he would give up his very soul to protect his friend, showing the depths of his devotion.

This devotion was entangled with his duty of carrying the Soul Eater and keeping it out of the clutches of Windy. Ted was willing to pass the rune to the hero, even knowing the pain it would cause. He even claimed he didn't care if the hero hated him for it. In that sense, it could be argued that the rune itself always remained paramount to Ted.

He had a habit since childhood of asking for "big favors". Despite his advanced age, he still sometimes reacted like a youth. When he was called a kid by Futch, the remark provoked him into almost spilling his secret. 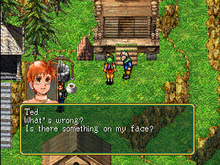 Uh, no, your eyes are perfectly proportioned.

Ted was the owner of the Rune of Life and Death and a survivor of the destruction of the Village of the Hidden Rune. Raised in the village, which had spent generations in hiding hoping to prevent the use of the cursed rune, Ted acquired his rune at a young age, when Windy came to the village seeking the rune. Ted's grandfather, the Village Chief passed it on to Ted and bade him to escape while Windy attacked the village. Ted was able to escape but would be forced to wander for over 300 years, endlessly pursued by Windy and her minions.

Halfway through his wanderings, Ted attempted to escape the curse of the Soul Eater, boarding the Fog Ship and entrusting the rune to the Fog Ship Guide. He would sail on the Fog Ship for many years, physically growing while being removed from the rune's influence, before encountering the Headquarters Ship during the Island Liberation War.

Serving as a herald of the Fog Ship Guide, he would gradually regain his spark, seeing the hero forge ahead despite also being the bearer of a cursed True Rune, the Rune of Punishment. Finally, Ted would confront the Fog Ship Guide and reclaim his True Rune, agreeing to join the crew of the Headquarters Ship in order to repay his debt.

Because the curse of the Rune of Life and Death cast a shadow over his life, Ted tried to keep his distance around others. Deep inside however, he was a friendly boy who cherished his friends. Still, this cloud made him act stand-offish and rude to those who tried to get close to him, such as Aldo, although towards the end of the war he began to open up slightly more. Following the end of the conflict, he would resume his wanderings for another 150 years or so. 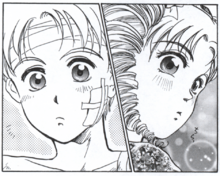 He's no good for you, girl. Really!

At some point, pursued by Windy's minions, he would be found hurt outside a forest by Mu Village. After convalescing there, he would fall in love with the young woman who nursed him back to health. Eventually the two would marry. However, some ten years later, with Ted continuing not to age, he made the decision to leave her.

A short while thereafter, Ted would learn that Mu Village had been wiped out and its population killed. Their right hands had all been cut off, as part of Windy's search for the Soul Eater. This experience would crush Ted still further, leaving him in something of a stupor. He would eventually make his way to Gregminster, indistinguishable from any other orphan or street urchin. 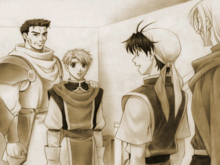 Okay, I know you said you wanted a puppy. But, hear me out...

In SY 453, Ted would be found by Teo McDohl. Ted would describe himself as a war orphan who lost his family in the War of Succession. Teo initially invited Ted to stay at his house, but Ted refused, saying he did not want anyone to see the scar on his right hand. Instead, he would live in a small, rented home nearby.

Over the next two years, Ted grew particularly close to Teo's son, considering him his only true friend in the past 300 years. At several points, he tried to confess his past to the hero, but was unable to do so. Ted initially had planned to leave the McDohl family after a few months, perhaps a year, as he had done with other acquaintances in the past. However, his bond with the hero led him to remain in Gregminster much longer than that. Still, he always knew he would have to leave eventually, due to his cursed rune. 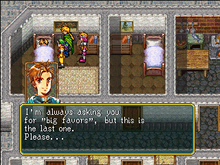 No, I'm not giving you another 20 bucks.

When he, McDohl, and Kanaan travelled to Mt. Seifu to subdue the bandits there, they encountered a Queen Ant, a monster they were unable to defeat. In order to save the group, Ted used the Rune of Life and Death. This would be one of the few times he was grateful to hold the cursed rune, being able to save his friends.

Upon their return to Gregminster, Windy was alerted to the rune's presence. Windy demanded that Ted give her the Soul Eater; Ted managed to get away but was heavily injured and collapsed on the doorway of the McDohl's residence. Soon after, the Imperial Guard arrived to collect him. Ted passed on the rune to his friend, despite knowing the curse it would bring to him. Knowing there was no one else he could trust; Ted passed on the rune and urged the hero to leave while the Imperial Guard still thought that Ted had the rune.

Much later, as the Gate Rune War continued, the hero and Cleo would encounter Ted again, this time in the past, thanks to the power of the Star Dragon Sword. Witnessing the tragedy at the Village of the Hidden Rune, they saw Ted inherit the rune. The young child begged the group to take him with them but tragically they were unable to, leaving the boy to his fate, knowing how it would all end. His memories of meeting the group would gradually be lost over the next 300 years. 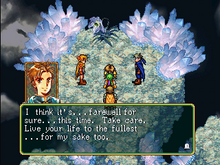 Uh, you're kind of blocking the Moonlight Weed.

Yet, in the present, Ted still lived. After being captured by the Imperial Guard, he was given a Conqueror Rune by Windy, which took control of his body. Forced by Windy to confront his friend and regain the Soul Eater at Seek Valley, Ted was able to use the proximity of the Rune of Life and Death in order to regain some control of his actions.

Mustering the power of the Soul Eater, Ted was able to gain just enough power to gain control of his body and commanded the Soul Eater to take his soul. In his final words, Ted addressed his best friend, telling him that to live his life to the fullest, for Ted's sake as well as his own.

Ted's sacrifice may have been his own atonement for cursing his friend with the Soul Eater, or perhaps death was the only form of freedom left available to him.