Snowe Vingerhut (スノウ・フィンガーフート, Sunō Fingāfūto) is a major character in Suikoden IV who also appears in Suikoden Tactics. Snowe is the spoilt but generally well-intentioned son of Vincent Vingerhut, lord of Razril. 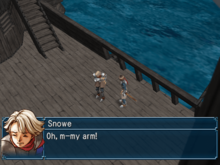 Oh, like I was gonna use any other picture.

Snowe was the only son of Vincent Vingerhut, lord of the Gaien island of Razril. At an early age, the household adopted an orphan to be Snowe's caretaker and the two would become childhood friends, almost brothers, despite the inherent inequality in their relationship.

Growing up with a lavish and spoiled lifestyle, Snowe did not grow into a bad person, necessarily, but had an inflated sense of pride which did not always go together well with his timid nature and lack of dependableness in times of crisis.

He attended the Knights of Gaien academy with his friends and graduated peacefully enough. However, his mishandling of his first mission; escorting an Orark Maritime Trade ship which came under attack by the pirate Brandeau led to Commander Glen inheriting the Rune of Punishment. When Snowe later saw Glen die after using the rune, he accused his childhood friend of being responsible in his testimony, resulting in Katarina's expulsion of the hero from Razril. 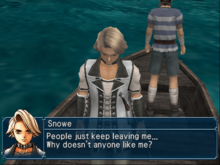 It's probably that whole lifetime of poor choices thing you've got going on.

Following this, Lord Vingerhut ensured that Snowe would succeed Glen as commander of the knights, regardless of his inexperience. In an attempt to foster peace, he would swiftly surrender Razril to the Kooluk Empire and cooperate with Graham Cray's hunt for the Rune of Punishment. However, the anger of Razril's citizens meant that he was unable to return to the port after leaving to attack a pirate band (in actuality the Headquarters Ship under the command of his old friend).

With his position lost for good with the liberation of Razril by the Allied Forces, Snowe turned to piracy and ended up leading an attack on his old friends in an attempt at revenge for the slights he felt he suffered. Easily repelled, his small measure of authority would not last long and he was eventually abandoned at sea by his pirate associates.

Eventually, the Headquarters Ship came across Snowe, adrift at sea and took him aboard. Finally humbled by both his experiences and his friends continued attempts to reach out to him, Snowe accepted their forgiveness and fought alongside his comrades once more for the remainder of the war. 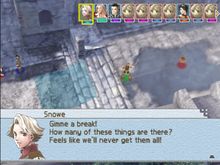 Following the war, having grown greatly as a person, he asked forgiveness from the people of Razril for his actions. Allowed to return, he would live in Razril not as an aristocrat but as a normal citizen. Now a calmer, more humble young man, Snowe would help Razril by routinely patrolling for Furball infestations.

Snowe would join Kyril's group traveling to Kooluk to investigate Rune Cannons at the request of his old friend.

Snowe's last name, Vingerhut, stems from the German word Fingerhut. It can either mean thimble or Digitalis, a genus of plants of which many are toxic.