Camus (カミュー, Kamyū) is a character in Suikoden II and Genso Suikogaiden Vol.2. He is the cool-headed captain of the Red Knights of the Matilda Knightdom.

A handsome swordsman who serves as the Commander of the Red Knights of Matilda. He always has a calm demeanor, but his heart burns with the passionate conviction of a knight. He is a close friend of Miklotov, his Blue Knight counterpart, and is known as a true knight in both manner and deed.

Handsome and charming, Camus had short brown hair and matching eyes. He held special pride in his sword, Uriah.

As a knight of Matilda, he wore a red coat along with a purple half-cape on his left shoulder. Beneath this, he wore white pants and knee-high black boots, trimmed with red. He also wore white gloves. On the left side of his chest, he wore the emblem of the Matilda Knights. During the Dunan Unification War, he removed this for a time due to abandoning his post to join the New State Army. 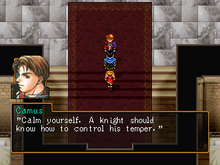 In my experience, telling people to calm down rarely works

Camus' fighting skills came to be considered first-rate as leader of the Red Knights, but he was also lauded as a charming, polite young man who knew how to treat women. Camus' behavior was also said to be less naïve than that of other knights and because of his charm, was less stiffly formal than Miklotov.

Like Miklotov, he was held in high esteem in Rockaxe Castle, in contrast to the less popular Gorudo. In contrast to the more hot-headed Miklotov, Camus kept calm and believed that a cool head was needed in battle. Even when upset, he was unlikely to reveal his emotions.

He has a 1-3 record against Miklotov in training duels, though the two have never fought to their fullest extent and Camus was known to be quick to concede. Though seemingly the opposite of Miklotov in many ways, their shared chivalrous nature and passion for justice forged a firm friendship between them. 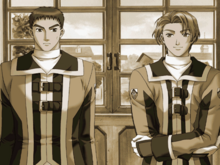 Camus is a knight of the Matilda Knightdom. Originally from the Kamaro Alliance of Free Knights in Grassland, Camus was born the second son of a knight family that possessed a domain. Growing up, he would become childhood friends with Maki, the daughter of a trader who frequented his family's lands. In Kamaro, only eldest sons were eligible to become knights and so Camus moved to Matilda in his youth and took the test to become a knight.

He and Miklotov took the test in the same year and they set a new record for the longest mock fight during their exam. Both were accepted on the same day as knights and Camus rose through the ranks of the knighthood, eventually becoming the leader of the Red Knights of Matilda whereas Miklotov became the leader of the Blue Knights. 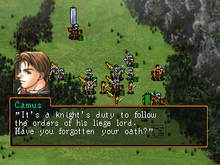 Don't believe the chess sets, a knight IS a pawn

Camus and Miklotov became captains of their respective companies at a relatively early age due to a combination of factors. The Matilda Knights meritocracy was a great benefit to them both, as was their being positioned at a key generational change within the order caused in part by Gorudo causing the downfall of more senior leading knights that could rival him.

Camus accompanied Gorudo to the meeting on Jowston Hill prior to the outbreak of the Dunan Unification War, where he charmed Nanami after Gorudo brusquely bumped into her. His Red Knights were not ordered to Muse City's aid during the Highland Army advance but Camus was assigned to bring Miklotov Gorudo's withdrawal command. 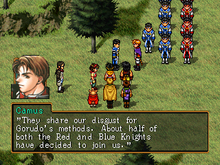 Defecting? No, this is a field trip. It's a knight's duty to stop asking questions, newbie

When the hero came to Rockaxe Castle in an attempt to convince Gorudo to ally with the New State Army, Camus broke his oath as a knight to join the New State Army in order to fight against the Highland Kingdom, disgusted as he was with Gorudo's methods and lack of intervention in the on-going conflict.

After his resignation, Camus convinced around half of the Red and Blue Knights to join him and Miklotov. As a member of the New State Army, Camus fought against the Highland Kingdom, even commanding one of the flanking units used against Kiba Windamier while defending the New State Army Headquarters.

After the war, Camus returned to the Knightdom and worked with Miklotov to reform the organization, before taking a journey to the Grassland alongside Miklotov. 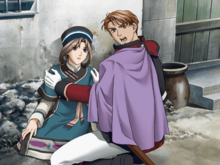 Do you mind? I'm flirting here

During their travels, they helped Milit Village to get rid of Clant, a former Matilda Knight who claimed to be the Flame Champion, and his group of bandits. They were aided by Nash and several of their old comrades in the New State Army.

Like Miklotov, Camus was shocked to hear soldiers of the New State Army had apparently looted the village during the war and recommitted himself to his fight for justice. Camus was also reunited with Maki again in Milit. She treated the wounds he received protecting her from Clant. Following this adventure, Camus and Miklotov would resume their journey.