Maximillian (マクシミリアン, Makushimirian) is a character who appears in both Suikoden and Suikoden II as well as Genso Suikogaiden Vol.1. Maximillian is the leader of the once proud Maximillian Knights and is ably assisted by his squire, Sancho.

Maximillian was a knight commander who had led the Maximillian Knights in the former Scarlet Moon Empire. Once respected and prosperous, many years ago, Maximillian and the order decided to fight for the City-State of Jowston in their border dispute with Highland without permission and the order was disbanded. Still, Maximillian would continue in the ways of the knight. 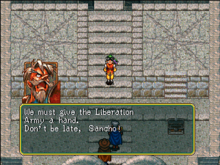 Where were you when we were sewer-dwellers?

During the Gate Rune War, Maximillian would grow steadily angrier, hearing the activities of the corrupt Imperial regime. When he received word that the Toran Liberation Army was fighting at Moravia, he would attempt to aid in the attack with his squire, Sancho. Although he was too late to join the attack, Max was able to join the Liberation Army when they crossed paths at the Northern Checkpoint.

Being around so many young fighters would seem to rejuvenate the ageing knight and he was eager to take to battle at any time. Following the war, he seemed to retire from the knighthood but three years later, he would fight in the Dunan Unification War. Hearing rumors of war in the City-State of Jowston, Maximillian determined that the New State Army was on the side of justice and travelled to fight alongside him.

He fought without Sancho by his side, his squire having returned home to visit family at the time. At the age of 65, by this point Max's skills were a little rusty and he was unaided by the many knights who rose to fight under his banner during the Gate Rune War, but he was determined not to be shown up by any young soldier.

Following the end of the Dunan Unification War, Maximillian would finally lay down his sword and retire from his long career as a servant of justice.

Although Maximillian could be reckless and a little pushy when it comes to his chivalry, he was, in spirit, a true knight with a strong, gentle heart who wished to protect the people all in the name of justice.

Rather than focusing on restoring his name or official status as a knight, or that of the order, Maximillian instead choose to simply follow his own philosophy of living a life of justice at all times. In that way, he felt that as long as he lived up to the duties of his order then the knights were never truly gone.